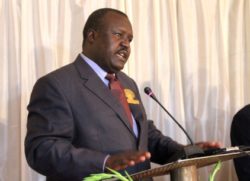 TellZim Reporter
Vice president of the Pan-African Parliament (PAP), Fortune Charumbira has bemoaned the plight of African refugees seeking sanctuary in the Europe Union (EU) as modern-day slavery and accused the bloc of treating the refugees who make it to its shores as animals.
Speaking at the ‘We the People: Peace in the Horn’ conference in Brussels recently, Charumbira said during the course of the event, he received shocking firsthand testimony of the inhuman experiences that refugees suffer on their way to Europe and in their quest to integrate.
“I have listened to many refugees; it has been shocking to hear their stories. Their testimonies reveal modern-day slavery in Africa. Heart-breaking and horrific stories that I have been hearing here are totally a reflection of the violation of human rights of highest order. We need to do all in our power to stop slavery on the African continent,” said Charumbira.
He accused EU of blatant violation of the rights of the mostly Eritrean refugees, saying the bloc was abetting their suffering.
“We were told that often, Europe’s invisible hand is ever present in funding Coastal Guards who discriminately harass our brothers and sisters at borders. Another shocking revelation is that of the whole cartel and network of very powerful rich people who are involved in the human trafficking trade in Europe and in Africa.
“I would like to think that in the manner that EU preaches the respect for human rights as enshrined in the 1948 Universal Declaration of Human Rights (UDHR), their voices must be louder in calling for the end of ill-treatment of migrants. Europe which projects itself as champion and policemen of human rights, risks losing dignity and integrity if they continue to respect the free movement of goods and commodities across continents and also respecting the rights of wildlife on the African continent but at same time contributing to the inhuman and degrading treatment of African migrants,” Charumbira said.
He said Europe should take more responsibility for the crisis which he said had its roots in slavery and colonial dislocations.
“Today, Africans are being seen as nuisance in the West with many of brothers and sisters perishing as they try to run away from their countries…. the problems that we have in Africa at large and in the horn in particular, it’s a creation of the Westerners who decided to sit somewhere in Berlin in 1884 and divided our motherland. The rest that followed only worked to brew chaos in Africa.
“The Europeans themselves were the first to be illegal migrants in Africa and they did it with clear conscience but today, they are treating our brothers and sisters like animals,” Charumbira said.
He also took a thinly-veiled attack against repressive governance systems and security heavy-handedness in Eritrea.
“The widespread of use of force, coercion and brutality to achieve political goals has remained indelibly enmeshed in the Horn of Africa. Such use of violence to quell real or perceived threats to national security has left deep scars among the communities in Africa. There is apparent lack of open dialogue on the need to correct past and on-going threats to peace resulting in the sustenance of both open and latent strife among the citizens,” Charumbira said.
He urged participants to come up with a clear action plan for presentation to PAP and African heads of state.
“As vice president of PAP, I can assure you that we are going to compile all the sad stories that I have heard and present them to our parliament so that this issue will be put on the agenda on our next meeting session in February 2019,” he said.