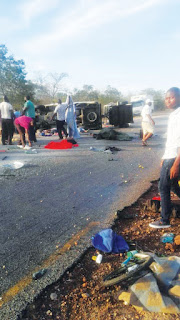 …who is to blame for carnage on the roads?

The high number of accidents which have been recorded on Zimbabwean roads in the past few months has alarmed citizens and the country’s safe roads advocacy but the question still remains whether to blame the dilapidated roads or the negligent, half-baked drivers.
The Traffic Safety Council of Zimbabwe (TSCZ) has taken the lead in the campaign against neg-ligent driving by embarking on an extensive awareness campaign this year.
The number of road accidents has, however, continued to rise with many of them being fatal.
The November 7, 2018, Rusape bus disaster involving Smart Bus Express and Bolt Cutter buses along the Harare - Mutare highway which claimed at least 47 lives could be cited as a good ex-ample of ‘bad driving gone bad’.
By local standards, the state of the Harare-Mutare highway can be described as ‘excellent’, so it can only be the drivers’ errors or something else that caused the tragedy.
Countless more fatalities have been recorded on the road since it was upgraded in 2012, perhaps more fatalities per year than over the previous when it had not been improved.
Many other accidents are happening on the ‘notorious’ Harare-Masvingo highway which motor-ists love to call ‘a death trap’ due to its narrowness, poor maintenance record and the heavy traf-fic it carries daily.
Vehicle side-swipe each other, some encroach into the wrong lane while others engage in head-on collision as they try to avoid potholes, rugged edges or even due to lack of alertness caused by many factors including fatigue and medical conditions.
Along the same Harare-Masvingo highway, one of the most tragic accidents of recent times was when two Jarax buses side-swiped near Pimbi River leaving seven dead and dozens injured on August 23.
TellZim News contacted Passengers Association of Zimbabwe (PAZ) president Tafadzwa George Goliati over the topic and he expressed displeasure over the state of roads.
"Our roads are now in bad shape because quality road engineering is lacking and we thought  Zimbabwe National Road Administration (Zinara) would allocate more money to the rehabilita-tion of our roads especially the Harare-Beitbridge highway but the road has been neglected and has claimed so many lives," said Goliati.
However, Coach and Bus Operators Association (CBOA) Chief Executive Officer (CEO) Alex Kautsiro thinks road carnage is not caused merely by bad roads but also reckless drivers who do not apply what they are taught.
"If we are trained drivers we are supposed to respond appropriately to the challenge of perform-ing this function. The majority of road accidents in the country stem from human error which, in the case of bad road infrastructure, would be from poor judgement.
“It would be sad day to just appropriate accidents to bad roads and not consider our reaction to these conditions as drivers," said Kautsiro.
When asked to express his views on this topic, TSCZ spokesperson Tatenda Chinoda took special interest in the Rusape accident which he said could have been prevented if road rules had been followed.
He unapologetically blamed reckless driving and speeding as the major causes of road carnage.
"We note with a concern the many road fatalities in the month of November. Speeding is the greatest error which our drivers are committing. The Rusape accident was the most preventable road traffic crush, our drivers are not following road rules. Drivers can now be likened to Boko Haram because they are now killers," said Chinoda, referring to the savage Islamist group perpe-trating atrocities in Nigeria.
National police spokesperson Assistant Commissioner Paul Nyathi also shared his sentiments on this issue saying although the country had some roads which are bad, drivers were largely to blame.
"Most of the accidents that we have recorded show that drivers are on the wrong side. They overtake even when it is unnecessary and they are not adhering to road rules. We can partly blame bad roads but some accidents are occurring on good roads and overall, drivers are causing most of the accidents," said Nyathi.
Another factor which cannot be left out is the issue of half-backed drivers that obtain licenses and they then drive recklessly; often speeding and not following road rules.
In June this year, the Vehicle Inspection Department (VID) fired 62 officers for corruption in-volving the issuing of certificates of competence to undeserving applicants.
Nonetheless, drastic measures have to be taken to maintain and improve the roads, stop negligent driving and end the corruption which continues to taint the VID if the country is to make any positive impact on its road traffic safety record.
There cannot be two way about it because at the moment, the road traffic safety discourse is characterised by discord as to what are the causes of the challenges being faced.
Share !