HWPL Press Release on 16 Days of Activism Against Forced Conversions 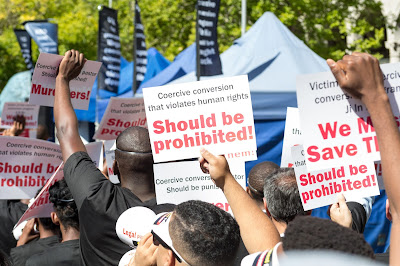 As the international community raises awareness for no violence against women and children during the 16 days of activism, the call to ban coercive conversion is remembered on the anniversary of the incident of the late Ms Ji In Gu, a young-women who died during a forced attempt to convert her religious belief.
The universal right to the freedom of religion has been called into question across Africa in 2018 as African states are moving towards the regulation of religious institutions which have been accused of malpractice resulting in severe suffering.
While human rights violations continue to abound in the name of religion in Africa, a year has passed since the death of the young Ji In Gu from South Korea, which shed light on the practice of coercive conversion.  In Africa, her death was mourned as events and protests took place across prominent cities in Southern Africa to commemorate her life and raise into question the importance of the protection of the right to religious freedom in the African context.
With the upcoming anniversary of the death of Ms Ji-in Gu from Hwasun, Jeonnam, who died at the hands of her family who attempted to forcibly convert her religious beliefs, ordinary citizens wishing to bring an end to coercive conversion practices which still run rampant, published an advertisement calling for a “Ban on Coercive Conversion” in The New York Times.
Last year in South Korea, where freedom of religion is guaranteed by its Constitution, a woman was kidnapped and killed because of her different religious beliefs. However, the domestic South Korean press turned a hard, cold shoulder on the incident, writing it off as a “religious matter” and a “family issue.”
As a result, the pastors who use coercive conversion as a means of generating income are still formulating and encouraging such programmes. There have been 137 confirmed victims of coercive conversion so far this year as of the end of October, and the danger of other instances of the “Ji-in Gu incident” occurring is increasing.
In contrast to Korea, overseas press and media in countries such as the US considered coercive conversion as a severe violation of human rights and shed the spotlight on the death of Ji-in Gu. There were in fact rallies and campaigns against coercive conversion programmes held in 23 cities in 15 countries that followed the death of Ji-in Gu, of which 33 foreign press provided active coverage.
Following this, voluntary donors gathered funds together for the anniversary of her death, to publicize in The New York Times the current state of coercive conversion and support the banning of this practice.
According to the content published in the New York Times on the 27th of November, a young woman (the late Ji-in Gu) was kidnapped through a programme created by pastors of the CCK (the Christian Council of Korea) to convert the religious beliefs of its targets. She escaped from the first attempt and even participated in a rally held to oppose the practice, but the second time she was kidnapped she died of asphyxiation.
The article states that in the wake of her death, the entire globe is drawing attention to the violation of the universal right to the freedom of religion, and emphasized that efforts to aid those that need protection from religious persecution are on the rise.
It pleads for its readers to take interest and participate in the protection of victims like Ji-in Gu, and give support to rallies against the CCK and coercive conversion programmes.