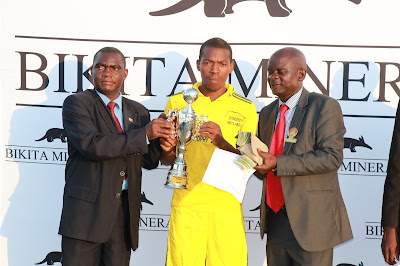 Clayton Shereni
Bikita Minerals Social Soccer League Team successfully defended the Chief Marozva Trophy after defeating Mufuka 4-0 in the final match played at Lithium Stadium on Sunday last week.
Popularly known as Lithium Boys, Bikita Minerals walloped Mangondo 6-1 in the semi-finals. The first round of the matches were played on October 17 at Pamushana High School.
In the other semi-final, Mufuka edged Pamushana High School 1-0 to book a place in the finals where they played and lost to Bikita Minerals.
The winning team showed class as they netted four goals with no reply from their competitors to be crowned champions of the 2018 Chief Marozva Trophy.
Bikita Minerals coach Lambert Mashoko coach applauded his boys for what he called a superb show.
"The boys played well. They were fantastic but of course it was not easy. Hard work and consistency ultimately paid off and we emerged victorious," said Mashoko.
In the netball category of the tournament, competition was very tight with teams at all stages exhibiting good performances throughout.
It was however last year’s winners Gombo who carried the day by beating Pamushana 41-22 in the semis to book a place in the finals while Nyika eliminated Bikita South by a 33-16 margin.
The finals saw fan favorite Nyika beating Gombo by a 29-23 score while in the third and fourth play-offs, Pamushana won 21-8 against Bikita South.
The tournament was incepted in 2015 as a community project for teams that fall under the jurisdiction of Chief Marozva but has since expanded to include teams from the whole Bikita district.
Top three teams in the soccer and netball category walked away with monetary prizes while the champions were further awarded with floating trophies and certificates.
This year's edition of the tournament was held under the theme ‘Building Better Communities Through Sport’.