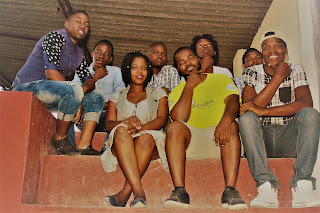 Masvingo-based upcoming Afro-Fusion band, Panhimbe Crew has pledged to provide free entertainment at functions this December as part of the band’s efforts to popularize its work.
The band, which has bagged many awards in various competitions recently stole the limelight at the Oliver Mtukudzi and Alick Macheso shows, is slotted to curtain raise Thomas Mapfumo’s Masvingo leg of his nation-wide peace tour concerts scheduled for December 15 at Caravan Park.
Panhimbe Crew founder, Tafara Pande said the band wanted to thank its fans for giving it enormous support in the short period it has been on the scene.
"The community of Masvingo deserves a thank you so for the rest of the festive we are going to provide free entertainment wherever we are called to perform be it at weddings, birthday parties, graduation parties and any other events," said Pande.
He said the band will be officially unveiled this festive season and an album will be launched possibly next year.
Pande said the band was committed to teaching music-loving youths how to sing and play instruments in order to keep young people busy.
“We are here to help the youth as a way of fighting idleness, crime and drug abuse. Our hands are wide open to embrace any young person and help them with some musical skills,” Pande said.
The 10-member band is expected to ignite the local Mukanya Bira where various local acts are targeting to charm the Chimurenga music legend.
The band appeals to Masvingo community for assistance since it still needs a lot of support to grow.
Share !