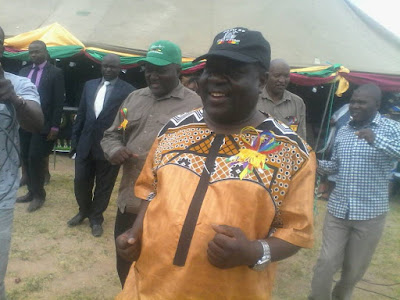 Zanu PF national secretary for the commissariat, Engelbert Rugeje has kept at bay those harbouring ambitions to remove Masvingo provincial chairperson Ezra Chadzamira, saying the new Minister of State for Masvingo Provincial Affairs will retain his influential party post.
When Chadzamira was appointed minister, some bigwigs started to position themselves to take over the provincial chairperson post, claiming Chadzamira could not simultaneously hold both posts as that would make him ‘dangerously too-powerful’.
Speaking at a Zanu PF inter-district conference at Masvingo Polytechnic on Tuesday, Rugeje warned those eyeing Chadzamira’s job to back off.
“We hear there are people who have been campaigning to replace Chadzamira but we say it is not yet the time for that. Restructuring will be done next year and the commissariat will give you the date.
“Right now is the time to work and unite the party not to create divisions. Let us work to bring more people to the party and not chase people out. Labelling people along factional lines will not help anyone but will destroy the party,” said Rugeje.
Some party members, however, have been whispering accusations against Rugeje himself, alleging he was fronting a secret bid to make Bikita West legislator Elias Musakwa the new provincial chairperson.
At the same event, Chadzamira also got a seal of approval from Zanu PF national chairperson and Defence minister Oppah Muchinguri who praised Chadzamira as a dedicated party cadre.
“Chadzamira has seen it all and has won elections twice. This shows that the man is loyal and has the people at heart,” said Muchinguri.
The provincial youth league also resolved that they would want Chadzamira to remain provincial chairperson, pledging to defend him ‘with our blood’.
“As the youth league, we have resolved that Chadzamira should remain our chairperson and we rally behind him and we will defend him with our blood.
“Chadzamira has proven to be loyal to the President and he defended him during the fiercest fights last year when the G40 faction vilified him.
“He is a tried and tested leader and he did not waver when heavy punches were thrown his way. He led us through the trials and tribulations and we believe in his leadership,” said provincial youth league chairperson Brian Munyoro.