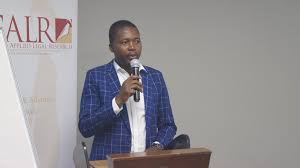 Own Correspondent
BRUSSELS – TellZim News director and Great Zimbabwe University (GZU) media lecturer, Golden Maunganidze has urged Africans to take advantage of new media technologies to fight human rights abuses on the continent.
Addressing a workshop on the side-lines of an on-going conference on peace and security in the horn of Africa here in Brussels, Maunganidze who was engaged as a social media expert, urged participants to look for ways they could leverage the potential of social media to engage the African Union (AU) and European Union (EU) to dedicate more time, resources and commitment to the fight against gross human rights violations happening in many parts of Africa.
“We have heard sad stories about Eritreans being tortured and abused as they try to flee from their country going to Europe and other parts of the world. We have heard that people are being sold for some few hundred dollars in Libya. These are heart-breaking stories but unfortunately the traditional media both in Africa and beyond see this as a tired story. I therefore urge you to mobilise each other and take advantage of new media technologies and tell your own stories in a manner that you think would be the best for the world to comprehend.
“Gone are the days when you would wait for traditional media to come and write your stories. Let’s take a leading role in denouncing human rights abuses using social media,” said Maunganidze.
He said there was need for a common platform in Africa where people could deposit their stories so that large global media organisations would have a consistently reliable source of credible information on Africa.
“We have to change the status quo now and take a leading role on all issues that concern us. I am not dismissing traditional media in any way but I am saying the ordinary person is now more empowered than ever before. Smart phones allow people to document cases of human rights abuses and disseminate such information for wider audiences,” he added.
Conference organiser, Prof Mirjam van Reisen said it was high time Europe found solutions to end the human rights carnage that Eritreans were suffering.
Prof van Reisen has done extensive research on immigration between Africa and Europe, and has published many books on that topic.
Seasoned investigative journalists who attended the conference said it was high time citizens become more active in publicising issues that directly affect them.
“There are many big stories taking place every day and we have no reason to be always focused on Eritrea alone … you must push for your own stories through social media until you draw the attention of big media organisations,” said Martin Plaut, a UK-based investigative journalist.
The conference, which has drawn some 200 delegates from around the world, aims to initiate strategies to promote peace and stability in the horn of Africa.