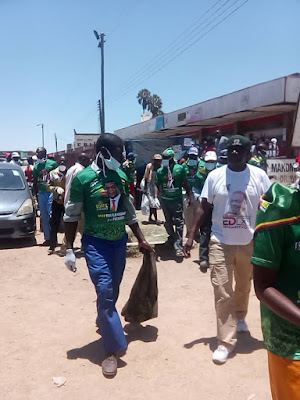 MPANDAWANA - Some MDC Alliance supporters in Ward 33 Gutu Central are alleged to be harassing anybody seen wearing Zanu PF regalia in the sprawling town of Mpandawana.
Ruling party supporters told TellZim News they were no longer free to don their regalia since ‘rowdy’ opposition supporters are going around forcing them to take it off.
“They force you to take off the regalia which they then set alight in your presence. This is the worst form of intimidation and intolerance,” said one Zanu PF supporter.
Another one said MDC Alliance sympathisers had declared Mpandawana their own stronghold where ruling party supporters are not tolerated.
“Zanu PF supporters from other wards are harassed when they move around Mpandawana town in their regalia. They are told to go back to their rural wards that voted for Zanu PF on July 30,” complained the ruling party supporter.
The ward is one of the three that were won by the MDC Alliance in the whole 41-ward Gutu Rural District Council.
Zanu PF Masvingo provincial youth chairperson, Brian Munyoro said he received numerous reports of the harassment and was going to take ‘peaceful’ measures to deal with the matter.
"We have received reports on that and as a party, we do not allow that. We want people to live in peace. We are going to peacefully deal with those who are doing that. No one should be banned from putting on their own political party regalia,” said Munyoro.
When contacted for comment, Councillor Bernard Chimwango said he knew nothing of the allegations, adding that he would be pleased to know the names of the people alleged to be doing that.
"I know nothing concerning that issue. I am even surprised. Maybe there are some of my party members who are going behind my back tarnishing my name and the name of the party. If you manage to get the names of those people, please let me know them," said Chimwango.
Earlier this month, Zanu PF national youth league boss Lewis Matutu was met with hostility in Chiredzi when he ordered that party youths must come to meetings in regalia.

He was told to his face the ruling party regalia was a disgrace in the face of a worsening economy and that putting it on exposed them to hostile citizens that blame Zanu PF for the economic suffering.