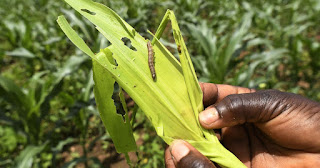 MASVINGO - The 2018/2019 farming season could be one of the worst in recent years as erratic rain patterns have already proven themselves while the threat of a serious army worm invasion has also became apparent.
The fall armyworm has been giving farmers a headache since the 2016/17 season and a fresh invasion was recently reported in Chipinge and other parts of the country.
Some reports state that the worm, which is an avid crop eater, might have come to Africa as eggs on imported maize and it has since spread to about 22 countries on the continent.
Armyworm is a caterpillar that attacks such cereals as maize, wheat and sorghum.
Speaking to TellZim News, local agritext officer Tongai Bodi said all small scale farmers should be alert and use appropriate chemicals as the pest can easily spread.
He also said pest control could be done manually in small fields without using chemicals.
“Farmers should scout for an infestation or attack, at least two times per week. If they discover eggs or larvae, they should use such pesticides as Nemesis, Macten, Lambda Ampligo 150 ZC, Coragen, Superdash and Tide Plus 5WG to control the infestation.
“Monitoring of moths using pheromones traps can also help in terms of early warning. This will help in preparedness of biological, physical or chemical control methods as well as to work closely with the extension officers in the affected areas. Farmers with smaller fields must conduct physical scouting of pests and destroy the eggs of larvae by hands,” said Bodi.
Some researchers say although fall army worm prefers maize the most, the pest can feed on over 80 types of plants.
Food Agriculture Organisation (FAO) also encourages the use of natural methods as toxic chemicals are believed to lead to the development of more resistant strains of the pest.
Share !