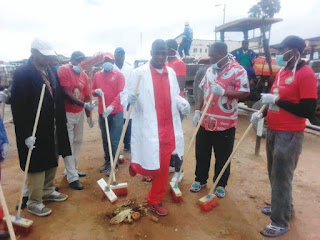 MPANDAWANA - Civil servants who turned up to clean the streets of the sprawling town on January 04 abandoned the exercise after it became highly politicised.
This was after Zanu PF supporters showed up in their party regalia, causing MDC supporters to go back home to take their own regalia.
The national clean-up campaign, which was launched by President Emmerson Mnangagwa late last year, takes place on the first Friday of every month.
When the initiative was launched last year, Zanu PF supporters in Mpandawana showed up in their numbers, dressed up in their party regalia, and it was the same this this time around.
Noticing that Zanu PF supporters had come in their regalia, scores of MDC supporters went back home and came back clad in their own party regalia. This caused extreme discomfort for many government employees who then went back to their offices.
Though the clean-up went on well without incident, it was apparent that the two political groups were in difficult harmony.
Gutu Rural District Council (RDC) MDC Alliance Ward 33 councillor, Bernard Chimwango said he was not amused by the behaviour of Zanu PF supporters hence the tit for tat reaction.
“This is supposed to be a national programme with no partisan meaning but we were surprised last year when our colleagues from Zanu PF sought to score cheap political points from it. It was the same thing this time around so we reacted the way we did. We have however gathered that Zanu PF supporters are planning to make it worse next month,” said Chimwango.
Gutu District Administrator (DA) Chiedza Tafirei confirmed the issue and said that she was even surprised to see people putting on party regalia.
“I was disappointed to see people coming in their party regalia but it was not possible to turn them away. We will however liaise with party leaders so that such scenario will not happen again. It is a government programme which must not be politicised,” said Tafirei.