Home » Sport » Parents pose for a picture with Mdumo and Mhlanga

Parents pose for a picture with Mdumo and Mhlanga 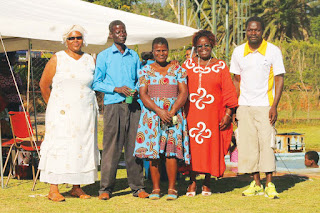 Parents pose for a picture with Mdumo and Mhlanga

ZVISHAVANE - Shabani Dolphins Aquatics last week held a farewell party for their patron; former Shabani Primary School head Joy Mdumo who retired on December 11, and her deputy Chenai Mhlanga who retired early August this year.
The function, which was held at Shabani Primary School, saw Mdumo and Chenai Mhlanga being presented with an assortment of gifts from the club and from various individuals.
The farewell celebrations where held in style as swimmers competed in different races while Mdumo also had her last time with the club members in the pool.
She also competed against the club’s coach Sungano Zhou and other club members in the individual medley race.
After the swimming, club members, parents and teachers had time to braai and enjoy their last day with Mdumo and Mhlanga.
The club’s chairperson Conilous Mhlanga hailed the two women for their sterling work at the school.
“Your retiring from your positions does not mean you are no longer part of us. You have pioneered many developmental projects at this school with your leadership skills. We will continue to engage you when advice is needed,” he said.
Addressing the gathering at the same occasion, Mdumo said the idea of coming up with a swimming club came when swimming legend Kirsty Coventry, who is now the Minister of Sports and Recreation, visited the school.
“We were inspired by Kirsty Coventry when she visited the school. At that time, the pool was not working and renovations were carried and the formation of the club followed,” Mdumo said.
She encouraged club members not to give up their talents but gather all the courage to pursue and cultivate them.
The club was founded in 2014 by Gordon Misihairambwi with the blessing of Mdumo and her deputy Chenai Mhlanga.
Shabani Dolphins is registered with Midlands Swimming Board which is also under the Zimbabwe Aquatic Union (ZAU).
The club has competed at provincial and national level, winning a number of medals in the process.
Share !