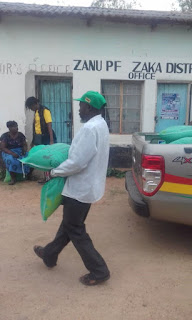 ZAKA – Agricultural inputs under the Presidential Input Scheme are being distributed at Zanu PF district offices in Zaka, with widespread conceptions that the move was meant to side-line non-ruling party supporters.
At its national conference held in Matabeleland South recently, Zanu PF adopted - as one of its resolutions - the fair and none partisan distribution of agricultural inputs.
Zaka RDC Ward 19 councillor, Peter Imbayarwo, however, confirmed that the ruling party was not practicing what it preached but added that he was not shocked as that had always been the ruling party’s approach in rural areas.
“I was not surprised when they started distributing inputs at their party offices because the programme is done by Zanu chairpersons since. Since the programme reached my ward, I was never consulted because I am from the opposition. Where the councillor’s signature is required, Zanu PF ward chairpersons sign on my behalf and do the rest,” said Imbayarwo.
Some people in Jerera accused Zanu PF ward chairpersons, Milton Chikwenhere and Gladys Chari of politicising the distribution of inputs.
Asked why the programme was being undertaken at ruling party offices, District Administrator (DA) Ndeya Nyede said he was not aware of it.
“When the programme started, we only gazetted the number of bags each ward was supposed to get and the rest is done at ward level. We don’t know how they transport their allocations and from where they carry out the distribution,” said Nyede.
The matter was raised in the Zaka RDC full council meeting held on Tuesday, December 18, with the three MDC Alliance councillors complaining that they were being excluded from the programme.
The DA and other councillors, however, remained silent and failed to give an answer.
President Emmerson Mnangagwa has never missed an opportunity to emphasise his so-called ‘new dispensation’ as a reminder to his perceived departure from former president Robert Mugabe’s approach, but this claim is proving to be largely hollow.
Share !