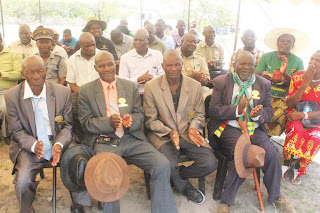 …as journalists are chased from dialogue meeting

CHIREDZI - Journalists from four media houses, including the State-inclined Zimbabwe Broadcasting Corporation (ZBC) were last Wednesday ejected from a public engagement on police brutality  at Chibwedziva Primary School.
The incident happened in the presence of Minister of State for Masvingo Provincial Affair Ezra Chadzamira.
This was after the Shangani community had alleged that the Provincial Joint Operations Committee was responsible for the fatal shooting of a 24-year-old man at Chibwedziva Business Centre on Christmas Day last year.
Three drunk police officers, who were led by Constable Zingunde of Bravo Troop (Support Unit) allegedly shot Tapiwa Gocheke who was reportedly part of a mob that was demanding the release of one Liberty Makondo who had been arrested in connection with an assault case.
An AK 47 riffle, serial Number 0889 and a magazine with 24 rounds were later recovered from a nurse at Chibwedziva Clinic who claimed it had been left by unknown men.
At the engagement meeting, Alliance Church national overseer, Pastor David Hobwani gave his testimony in front of Chadzamira’s delegation, saying security forces in the Sengwe communal lands had turned police posts into torture chambers.
“The relationship between the police and the community here has never been cordial. Police officers at Gezani, Chambuta and Chibwedziva have what we may call instant justice, where people are tortured without being taken to trial.
“In 2010, at Chibwedziva Police Post, a criminal was arrested and tortured and died there. In 2014 at Gezani, another man was assaulted in full view of his family and died near the police post. Then last year, during Christmas, drunk people fought at Chibwedziva business centre and three drunk police officers arrested Makondo and decided to take him to the police post.
“Fearing that the suspect will suffer the same fate, people requested that he be released but police refused and they shot Gocheke in the leg,” said Pastor Hobwani.
As Chiredzi East Member of Parliament (MP) Denford Masiya made his presentation, alleging victimisation of Shangani people on tribal grounds, journalists were asked to leave.
“The Support Unit should not be entertained at the heart of the community like this. In fact, they should be manning the borders there. We, as the Shangani community, are being victimised on tribal grounds. I worked with some of you and we never took a soul,” said Masiya.
Chadzamira later met the family of the deceased who was still in mortuary and promised to help meet burial costs and look after the family.
“It is unfortunate that a soul was lost and we are still carrying out investigations on what really transpired on December 25, and justice is going to prevail against all those who committed the crime. We are going to take care of the funeral expenses and the family as well afterwards,” said Chadzamira.