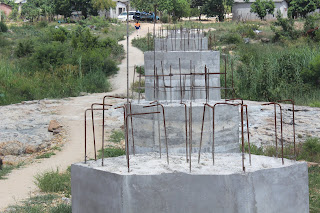 Masvingo Mayor, Collen Maboke told TellZim News on Tuesday that Rujeko foot brigde (above) under construction is already complete and waiting for official opening by the Minister of State for Masvingo Ezra Chadzamira. Maboke said he was reliably informed by the City Engineer that the construction was completed, however, soon after the interview with the mayor, TellZim News crew went to Mucheke River and took the above picture. The bridge was suppossed to be completed before rainy season and the ground breaking ceremony was officiated by the then Minister of State for Masvingo Josaya Hungwe. US 50 000 from Constituency Development Fund (CDF) and Us $40 000 from the council were poured for the construction of the foot bridge.

The Rujeko foot bridge project which was supposed to have been completed by November last year remains stuck with no sign of any recent developments pointing to its completion despite having been financed to the tune of over $90 000.
Masvingo Urban constituency received $50 000 from the Constituency Development Fund (CDF) and it was all channeled towards the construction of the foot bridge.
The city council also channeled $40 000 towards the project but to date the only development to show are concrete slabs reinforced with iron bars.
The ground breaking ceremony for the project was officiated by then Minister of State for Masvingo Provincial Affairs Jasiah Hungwe in June last year together with other Zanu PF dignitaries and council officials. 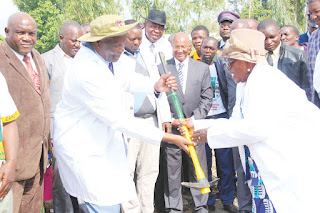 Mayor Collen Maboke said the city engineer had given an update saying the bridge was almost complete and awaiting for commissioning by the Minister of State Ezra Chadzamira.
"The Engineer gave us an update on the project and he told us the bridge was almost complete and waiting for commissioning by the Minister of State for the province," said Maboke
Town clerk Adolf Gusha admitted to having faced problems in securing the material needed to start the project.
"We incurred problems in trying to acquire some of the material needed for the project. I will have to check with the office on the details when we expect to finish the project you can call me later," said Gusha.
Share !