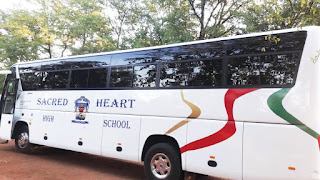 MWENEZI - Roman Catholic-run Sacred Heart High has defied unfavourable economic conditions and made an impressive accomplishment by taking delivery of a new bus at a time the school is also celebrating a pass rate improvement at both ‘O’ and ‘A’ level.
The 66-seater Yutong bus, which was imported from China with the facilitation of Drekofil Investment, was acquired to the tune of $400 427 courtesy of a loan facility which the school got after liaising with a local bank.
Speaking to TellZim News, Sacred Heart High School head, Brother Joachim Kamwana said it was exciting that what the school had planned for a long time had finally materialised.
“As Sacred Heart High School, we strongly believe that where there is a will, there is always a way. The school leadership, school development committee, parents and other stakeholders worked together to get this bus here.
“Pupils contributed a levy towards the purchase of this bus but that money alone was not enough so we applied for a loan at FBC bank to meet the costs,” said Brother Kamwana.
He said 2019 will go down in the history of the school as one of the most memorable, with the recently released ‘O’ level results being the best that the school has ever achieved.
“This is proving to be a blessed year for us. Since the establishment of the school our best ‘O’ level pass rate had been 44.88 percent but we have since risen to 59.03 percent. In addition to that, our best ‘O’ level pupil scored 8 As. At ‘A’ level, we recorded a 97.01 percent pass rate,” Brother Kamwana said.
The Rutenga school has become the first choice for many parents in Mwenezi district and beyond, due to many factors that include its convenient location, top-notch learning facilities and impressive record as a learning institution of repute.
Share !