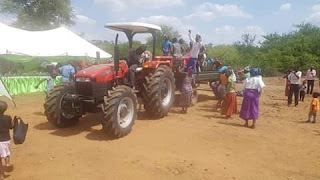 CHIREDZI - The Cotton Company of Zimbabwe (Cottco) has congratulated Chiredzi district for being the top producer of cotton in the 2018 cropping season.
The district produced 35 000 tonnes of cotton, with Ranganai Muzivirwa - who was named best farmer - winning a tractor, a farm trailer and a three-disc plough worth more than $100 000.
Muzivirwa, who has won many merit awards from Cottco over the past years, last season delivered a record 13.3 tons to Cottco from his 3.5 hectare dry plot; the best single production by one farmer among all the country’s 400 000 cotton farmers.
At the prize-giving ceremony in Ward 27, Chiredzi District Administrator (DA), Lovemore Chisema said government was serious about revamping the agricultural sector.
“Cottco has four business units in the whole country which are Sanyati, Honde Valley, Gokwe and Chiredzi. In the last season, more than 400 000 farmers participated in the presidential cotton input scheme in which Mr Muzivirwa was confirmed to be the best farmer of the year,” said Chisema.
Chisema said the decision to award the price was reached after considering many issues.
“Cottco considered so many things before giving Mr Muzivirwa this prize. They considered the size of the yield, cotton grade and tonnage per hectare. On the 3.5ha he planted, he produced 60 bales with an average weight of 250kg. This translated to 13 200kg and this happened in the Lowveld which is in natural farming region 5.
“This is a clear testimony that government through Cottco is committed to the upliftment of the lives of our farmers. Good farmers must be supported; Mr Muzivirwa has set an example that even if we are in region 5, it is possible to produce the best cotton yields in the whole country,” Chisema said.
Cottco Chiredzi business manager, Munyaradzi Chikasha urged local cotton farmers to emulate the good work as done by Muzivirwa.
“This is a clear testimony that if you follow what your extension workers teach you, it becomes possible to produce more tonnage per hectare. As we enter into the new season, let us press on and double our production capacity,” said Chikasha.