Chombwe water scheme to be resuscitated 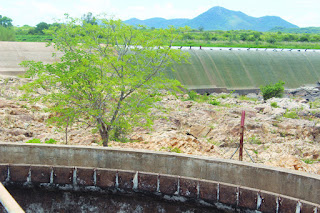 CHIVI - The Chombwe piped water project which stopped working in 2008 will soon be resuscitated for the benefit of thousands of families in the semi-arid Chivi district, it has been learnt.
Many people took part in a recent tour of the Tokwe weir in Tugwane River and the Chombwe Hill which hosts the storage tanks.
The people who took part in the tour include the Minister of State for Masvingo Provincial Affairs; Ezra Chadzamira, Chivi RDC chairperson Godfrey Mukungunugwa, Chivi North MP Matthias Tongofa as well as representatives from the District Development Fund (DDF) and Rural Electrification Agency REA (Rea).
Traditional leaders including Chief Chivi, Chief Nemauzhe and Headman Madyangove also graced the occasion.
The purpose of the tour was to get an fuller appreciation of the massive water project that was built in 1972 and served around 10 000 families with potable water until it stopped working 11 years ago due to many factors including mismanagement.
Stakeholders now agree that the project has to be urgently brought back to life and expanded so that it can supply 6 000 more families across wards 6,7, 9, 12 and 30 with water to drink and to start projects.
Speaking at the event, Chadzamira said the project will be the first beneficiary of government’s $31 million devolution budgetary allocation for Masvingo province.
“Chivi is the first district to come up with a livelihoods project this year. Other districts are still struggling to identify their own so I say well done to Chivi. Chombwe will receive part of the devolution money and I am pleased because the rural district council has also set aside $160 000 for this project. MPs will contribute through their Constituency Development Fund (CDF). We have to agree on the timelines so that this plan does not fail. I want to come back and commission this project in a few months’ time,” said Chadzamira.
He praised Mukungunugwa for identifying the project, saying the Muzhwi-Mushandike Canal will also benefit from the money, while the Lands department will identify suitable places to set-up new irrigation schemes.
Headman Madyangove, who stood up to speak on behalf of Chief Chivi, said he was pleased by the prospect of clean piped water making its way into the area once again.
“People and animals here desperately need water. I am happy water is coming and I hope this will not be empty talk. The people want action; all the important people I see here give me confidence that the work will be done. I thank the leadership of the province and the district for working together in this project.
“I also want to urge people to look after public property. There is no gain in breaking pipes and stealing parts. This is our project which we must protect,” he said.
In his remarks, Mukungunugwa said he was humbled by the response the project had received from many important officeholders.
“This is a first for us as Chivi district. The project has received endorsement from all the relevant offices and it is up to all of us to work together to make it a success. There is no other way for us; drilling boreholes is a waste of resources because few places have enough underground water to last us a season,” said Mukungunugwa.
The project, which was initiated in the early 1970s by then Headman Madyangove; Zishe Kranos Nyambi with the help of development partners, draws water from Tugwi River and the pipes run to outlying areas across a distance of around 30km via Chombwe Hill.