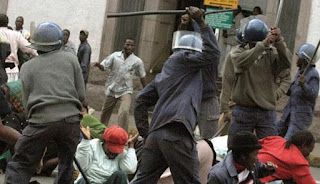 The Zimbabwe Human Rights NGO Forum has compiled some 1803 violations committed most-ly by the Zimbabwe National Army (ZNA) and the Zimbabwe Republic Police (ZRP) in the past few weeks following the national shutdown protests.
Security forces have been accused of taking a heavy-handed response to the protests; with vide-os, audios and pictures of battered and brutalised civilians dominating the social media scene over the past three weeks.
“The violations of human rights that started as the state’s response to mass protests on 14 Janu-ary, 2019 following the increase in fuel prices immediately took a widespread systematic charac-ter, the dominant actors being the Zimbabwe National Army (ZNA), the Zimbabwe Republic Po-lice (ZRP) and suspected ZANU-PF militia.  The systematic and sustained nature of the viola-tions raises fear that this is becoming a case of crimes against humanity,” the confederation of human rights civic organisations says in a report released on February 06.
The report compiled 17 extra-judicial killings, 16 rapes, one case of sexual assault, 26 abductions, 61 displacements, 81 gunshot assaults, 586 other assaults, 51 cases of destruction of property, 954 arbitrary arrests and 10 incidents of harassment of journalists committed largely by security forces.
“Post-protest retribution by the ZRP and ZNA officers resulted in the warehouse arrest and de-tention of over 954 people across the country, including children between nine to 16 years. The highest recorded arrests were in Harare followed by Bulawayo, then Midlands. There were also many arrests in Mashonaland West provinces,” the report says.
“As the Forum continues to monitor the situation and keep the world updated, it is important that national leadership from all sectors be seen to play a positive role in ending the ongoing vio-lations and charting a new way towards the peaceful resolution of the ongoing conflicts,” the re-port say in conclusion.
In many videos, police and soldiers in uniform were seen pulling people from their homes and savagely attacking them; triggering an international outcry that has left President Emmerson Mnangagwa’s regime as isolated as was his predecessor Robert Mugabe’s.