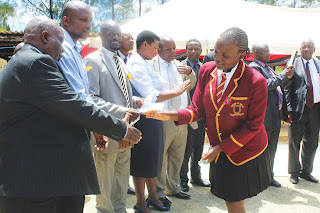 Tatenda Mugove is congratulated by teachers, councillor and

MASVINGO – Tatenda Mugove, an ‘A’ Level pupil from Temeraire High School in Mashava raised the province’s flag up high when she won the third prize at the national Southern Africa Development Committee (SADC) essay writing competitions.
Speaking at the prize handover ceremony, Mugove said she was overwhelmed by the honor of being selected as one of the best in the country and the best in the province.
“It is humbling to know that your work has been deemed the best of the best and I give praise to the Lord who made it all possible.
“I also urge my juniors to emulate this moment and help lift the school and the province’s flag higher. There is nothing special required to win this accolade. With enough dedication and hard work, anyone can win it,” said Mugove.
Temeraire head Thomas Mureriwa was in cloud nine saying Mugove had put the school on the international arena, a development that he said every pupil should work to achieve.
“We are happy today and we celebrate our victory. It is not Mugove alone who should be happy but the school and whole province should take pride,” said Mureriwa.
Masvingo district Ward 5 councillor Aleta Makomeke said she is proud to lead a Ward which has award winning people and called on parents to support the education of their children as they are the future.
“I take pride in being the councillor of this winning Ward. I plead with parents to support the education of their children because they are the future. Let us support the school and teachers in their work to make our pupils the best who can compete at big stages and win,” said Makomeke.
The first national prize went to Primrose Thandeka Tshuma from John Tallach in Matebeleland North while the second prize went to Matifadza Mangongo from Murambinda B High School in Buhera.