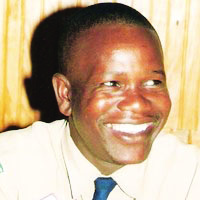 The Zvishavane Youth Centre (ZYC) has vowed not to move from the premises they are occupying despite receiving an eviction order from Zvishavane Town Council on December 21.
ZYC patron Bigboy Murenga began running his operations at the council’s swimming pool compound after reaching an agreement with the previous council.
The premises had been lying idle for years but the town council now says it wants the properties back.
Murenga told TellZim News they will not move unless council developed permanent structures for them in town.
"The council’s housing director, Nhlanhla Ngwenya on July 02 last year visited our arts gallery and praised the work we are doing here. He then asked us to identify a place for the construction of a permanent structure for ZYC. We identified an open space behind N. Richards and we sent a letter to council. We were shocked that they responded by sending us an eviction order before they have even started building the new structure,” said Murenga.
ZYC coordinator, Clifford Mugiya said their mandate was to work for the welfare of young people, their empowerment as well as to provide shelter to abused children.
"Currently 300 students from different schools within Zvishavane are registered with ZYC, 30 of them being artistes who have their artworks in the gallery. Now we are receiving an eviction order. Where do they want us to go?"Mugiya said.
Efforts to get a comment from the director of housing were fruitless as his mobile phone was not reachable by the time of going to print.