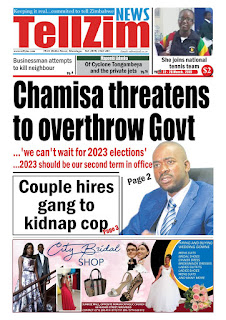 MDC leader Nelson Chamisa has said his party will soon be exerting more pressure on President Emmerson Mnangagwa and his government until they come to the negotiating table to resolve the countryﾒs intertwined political and economic challenges.
Chamisa said the protests that rocked the country in January were nothing compared to what they are planning.
Addressing a provincial council meeting at Mucheke Hall last Saturday, Chamisa said the situation in the country had become unattainable and the people were being robbed by their government on daily basis.
ﾓThe stay away protests organised by the ZCTU are nothing compared to what we are planning. They said we planned the stay away but we do not stay away, we stay in. We did not want to say anything on the ZCTU stay away because we knew it could have been worse,ﾔ said Chamisa.
He said the party was yet to finalise preparations on the massive protests.
ﾓIf things remain unchanged, we are going to call everyone to Harare. This will not be a one day protest but we will camp in the streets for the whole week until things change.
ﾓWe will not get into the streets and go out without achieving our goal. Be prepared for action, Masvingo get ready. We want to see everyone from Masvingo in Harare when we give the green light. We are not going back because we know who the people voted for. If we do not defend the people's vote, we risk having a situation where no one will vote for us in future elections because they will say we vote for you and you do not defend our vote,ﾔ said Chamisa.
He said he was not waiting for the 2023 elections to lead the country but will take over now because he was given the mandate by the people.
ﾓWe want to take over now. We will not wait for 2023 because by then we should be doing our second term,ﾔ said Chamisa.
Chamisa said they will not use violence but warned Zanu PF that they should not take advantage of their ﾑpeace-loving natureﾒ to use violence against them.
ﾓI told Zanu PF people that we do not want violence. I told them that shops that sell guns have not closed. Guns have not stopped to be sold in the country but we will not go for guns not because we canﾒt use them but because we do not want them.
ﾓThey should not underestimate us and walk all over us. When we say letﾒs shake hands and you come with clenched fists or catapults, we will show you that we have other things we can do, dry hands not catapults. Can you imagine if we say everyone across the country come to Harare, Mnangagwa will not have a chance,ﾔ said Chamisa.
He said they will pile political pressure on Manangagwa for him to come to the negotiating table and come up with a transitional mechanism which will last for a year or two paving way for fresh elections done by an independent electoral commission.
President Mnangagwa has revealed plans to splash millions of dollars to boost anti-riot arsenal and training to deal with violent protests and stop relying on the military to quell protests.