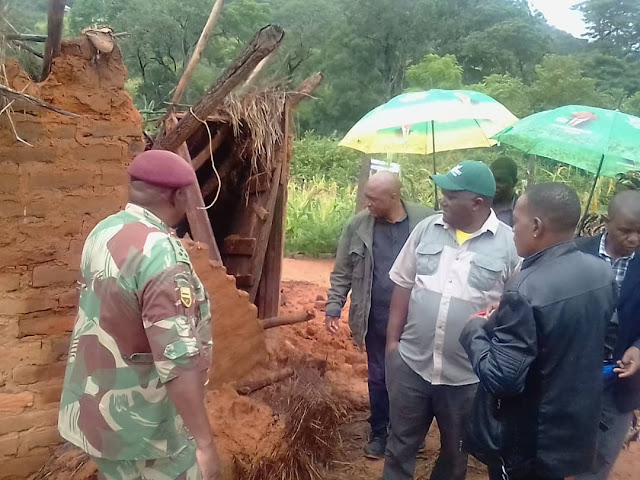 Authorities assess the damage of Cyclone Idai in Bikita

Courage Dutiro
Although Cyclone Idai’s effects were felt mainly in the Manicaland districts of Chimanimani and Chipinge, some 5 257 families in Masvingo province are also in distress after losing family members, houses and other belongings in the violent storm.
Data released by the provincial information office on Thursday, March 21, shows that five people, three male adults and two male children, were killed by the cyclone in Bikita district.
A total of 17 people were injured in Chiredzi, Gutu and Zaka districts while 511 houses were destroyed; 125 of them in Gutu, 45 in Masvingo Rural and 50 in Zaka.
A total of 5 257 households were affected by the excessive rainfall one way or the other, the majority of them in Bikita (3 134), followed by Gutu (948), Zaka (753), Masvingo Rural (345) and Chiredzi (77).
“The affected households need assistance in form of food, blankets, clothes, building materials, medical assistance for the injured, non-food items, funeral assistance and stationery for children affected,” reads the report which was compiled by the Masvingo Civil Protection Unit (CPU).
“To date, 13 schools were affected in Gutu and the district CPU is assessing the extent of the damage. Four cells and a kitchen at Mutimurefu Prison in Masvingo district were blown away,” the report reads.
It further says a total of 71 squat hole Blair toilets were destroyed in various schools, while a 1x2 classroom block was severely damaged at Mutsambiwa High School in Zaka.
Other materials that are listed as needed for the immediate relief of victims are tarpaulins, potable water, containers, aqua tablets and soap.
The report says measures taken in response to the crisis include the distribution of Social Welfare grain to all affected families throughout the province and the distribution of non-food items by the District Development Fund (DDF).
However, victims in Chief Chitsa’s area in Gutu told TellZim News they had not received any help despite their houses having been destroyed.
“Some seven families had their houses destroyed by the cyclone in this village alone but we have not yet received any form of help. It is a desperate situation here,” said Sherlieter Makadzange of Gijima village, whose kitchen hut was razed to the ground.