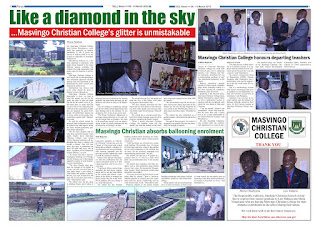 For Masvingo Christian College head Edison Muresherwa, every child has potential to achieve something in life if given the chance to explore what he or she is good at especially at secondary school level.
Muresherwa believes in a holistic approach to education, with pupils being exposed to the many different options available, but without the rigid expectation that pupils must be identical in performance.
Masvingo Christian College is now known for its non-discriminatory enrolment approach whereby getting form one placement is not determined by strict cut-off units obtained at grade seven.
Muresherwa has always said every child should be given a chance to prove themselves.
"Masvingo Christian College philosophy is clear; we look at what the school can do for the pupil, not only at what the pupil can do for the school. Once a pupil comes here, we make sure that we give him or her education that will lead to the acquisition of skills that are requisite for good livelihoods. We deliberately choose not to focus solely on the grades they would have started with," Muresherwa said.
He said the school valued the practical side of education as much as it does every other aspect, hence the many income-generating projects being undertaken.
"We do many projects and we take them seriously because when pupils finally leave Masvingo Christian College, their minds will be liberated, and they will understand that there is dignity and wealth in labour. They will also know that there is something out there for each and every one of them, regardless of the dimension of their abilities," he said.
The school now has a successful piggery boasting over 150 pigs, and has become one of the biggest suppliers of pork to local butcheries and supermarkets.
"The sows (female pigs) produce an average of 10 piglets at a time, and they can give birth at least three times a year which is what makes this project a profitable one. Last year, we had over 200 pigs and we sell them from time to time," Muresherwa said.
The school uses the pig dung to produce biogas, and it plans to eliminate the use of electricity for heating purposes, the hope being that only gas appliances will soon be used in all departments.
"We are looking at producing enough gas for the whole school departments that need heating and at the moment we are producing 7m3 of gas at any given time.
"The Home Economics department is no longer using electricity as it is now using the biogas that we produce. We want to do something similar in all our departments so that we totally eliminate the use of electricity for heating," he said.
The school also has five fish ponds and each has over 8 000 fishes, with some having been harvested for sale.
"We have already harvested the first batch and we have plans to start harvesting from other ponds soon because they are almost ready for harvesting," Muresherwa said.
The school has a solar-powered borehole from which it pumps water for all its projects, including the fishery project.
"When I joined Masvingo Christian College, the monthly water bill was $6000, but with the drilling of the borehole it has been reduced to less than $400 per month.
"We use borehole water for all our projects, and we have three Jojo tanks for domestic use. We also do drip irrigation all year round on the 50x50m plot where we farm maize and other crops," Muresherwa said.
The school has also embarked on a poultry project with bochsveld and broiler chickens.
Through all these projects, the school is engaging even pupils who may not necessarily be straight A learners.

Long-term planning at Masvingo Christian College has seen the Church of Christ-run high school being able to absorb a steadily rising enrolment over the past decade, with learning standards and the pass rate actually improving when it could be expected to decline.
School head Edison Muresherwa told this publication that the current enrolment stood at 2 300, a huge leap from what it was a few years ago.
“Enrolment follows many things including the laid down requirements and we are the most liberal in that regard and parents’ confidence in our ability to manage has grown, hence the rise in the number of children who are coming to us,” said Muresherwa.
The school has just finished building another block and plans are underway for another block which will be used for woodwork.
“After this block, we will work on a woodwork building. We currently have 10 classes for form ones and twos, which is big number for the staff compliment of 80 teachers that we have. We are, however, managing well and producing good results,” he said.
The school can take up to 30 pupils in a sciences class at ‘A’ level at a time when other can accommodate only 10 for science classes.
The school also maintains litter-free outdoors, with a litter-collection point behind classes from where Environmental Management Agency (Ema) personnel would come and collect recyclables.
“Ema used to collect the litter but it is now being done by council. There is, however, limited capacity in council and you sometimes find the places overflowing and we work hard to keep it safe,” Muresherwa said.
Practical subjects at the school include building technology and design, fashion and fabrics, textiles as well as food technology.
“Many pupils who go to polytechnics have to learn the basics of their courses from scratch but our pupils have an advantage when they pursue professional courses in areas that we cover,” said Muresherwa.