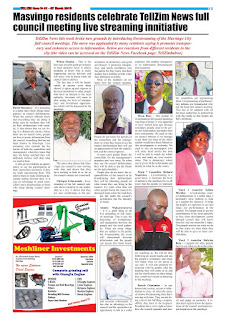 TellZim News this week broke new grounds by introducing livestreaming of the Masvingo City full council meetings. The move was applauded by many residents saying it promotes transparency and enhances access to information. Below are reactions from different residents in the city (the video can be accessed on the TellZim News Facebook page: TellZimbabwe)

David Masomere – live streaming is a noble idea which brings transparency to council deliberations. When the council officials know that everything they are doing is being seen by residents they will do their deliberations with serenity. It also shows that we are living in a democratic society where there are no sacred cows, people are free to access information from the council, something that has not been known in Masvingo. Live streaming also controls the behavior of both the councillors and management, when they know that they are being watched they will definitely behave well than what we used to hear.
It also gives residents an opportunity to see the participation of their councillors and know if they are really representing them. This allows them to make informed decisions during election time. It is also an advantage to good councillors and a disadvantage to those who sleep during council meetings.

Wilson Dumba – This is the first step towards good governance at local authority level. It allows residents to know who is really suppressing service delivery and will know who to blame when the council fails to deliver.
The fact that it will be broadcasted to anyone even those abroad, it opens up and exposes to the local authorities to other people who have an interest in the local authority. Investors will come in after seeing the level of transparency and investment opportunities which will be discussed in the meetings.
The move also shows that Masvingo city council is now moving with time and shows that they have nothing to hide in as far as the council matters are concerned.

Admire Wakurawarerwa – it is a good thing to do live streaming of full council meetings. This is just the beginning of transparency and engagement between the people and the local authority. There are many things that are hidden to the public but livestreaming the event will disseminate accurate information and the people can access first hand timely and accurate information. It has also an advantage to the council and the councillors an opportunity to talk to a wider audience, this enables transparency in information dissemination and acquiring.
Owen Bero – The system of livestreaming full council meetings was long overdue. It was supposed to have started long ago because nowadays people need to be given raw information and make their own conclusions. We used to rely on council minutes if we manage to get them but some of the information would have been filtered so this development is welcome. We used to rely on newspapers who will write short stories but now I will be able to watch the whole event and make my own conclusions. That is democracy where one is given all the information and decide on what he or she wants.

Ward 7 Councillor Richard Musekiwa – Livestreaming is a good move, it increases the level of debate in the meetings for we all know that the people we represent are watching us. We will be also following on social media and see the people’s comments and these will shape what we are going to say next. It will also promote interaction with the people, after the meeting they will come to us and ask for clarification on other things they would have heard us debating in the meetings.

Dereck Charamba – In any democratic society, access to information is a key, so when the council allows livestreaming then that’s moving with time. They are not doing a favor but fulfilling a responsibility they have to the taxpayer. Residents have every right to know how the council operates and how the councillors are representing them. Livestreaming of parliamentary debates are broadcasted why not the local full council meeting. This has to be adopted with all the local authorities in partnership with the media so that people are fully informed.
Ward 1 councilor Sellina Maridza – Livestreaming council deliberations is a noble idea, I personally have nothing to hide so I support the initiative. It helps the people we represent to see and judge our performances in the council. My people need to see my contributions in the local authority so that when development comes through council they will know that this was our councilor’s input. Our people need to see what we do so that when we meet them they will be able to give us more contributions.

Ward 9 councilor Babylon Beta – I support the idea, people have to see what we do in the council and judge us correctly. It is also their right to know the operations of the council and improves participation in the meetings.