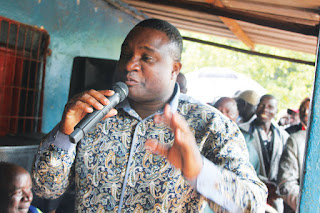 ….trashes legislature as a waste of time

Chivi South Member of Parliament (MP) Killer Zivhu has disparaged the legislature, calling it a place where ‘useless noise’ is made with no chance of the debates contributing to nation-building.
In a recent tirade on Twitter, Zivhu poured scorn on parliament, saying he would rather go back to his previous days as councillor in Chivi.
“I do miss the time I was councillor I could contribute to nation building but now as MP I have been reduced to useless leader (sic), only to talk as per instructions or wait to make noise in parliament even if the things said make a lot of sense my duty is now to make noise,” the tweet reads.
The tweet was accompanied by a picture taken when he became president of the Zimbabwe Local Government Association (Zilga) in September 2017. By then, he was also president of the Association for Rural District Councils Association (ARDC).
His sentiments seem to mirror the general feeling that most people aspire to go to parliament only to access the perks and privileges.
Most MPs have also been criticised for being backbenchers that are either too incompetent to contribute to meaningful debates or are prevented from doing so by their political parties’ whipping systems that puts political interests ahead of national good.
A former MP who refused to be named said Zivhu’s tweet was either a strong political statement or ‘was just one of the many attention-seeking rants by the publicity-crazed political celebrity’.
“He either meant it or he was just looking for attention. If you follow the parliament hazard closely, you would find that more than half of the MPs finish their whole terms without contributing anything. They simply sit there and wait for the session to end, have their lunch and go.
“Some of us really wanted to make constructive contributions but we were afraid of going against the party line and exposing ourselves,” said the former MP.
A few weeks ago, Zivhu engaged in an expletive-filled Twitter row with Norton MP Themba Mliswa, with the two trading accusations and counter-accusations of corruption and sexual improbity.
Zivhu is also the chairperson of the Zimbabwe Cross Border Traders Association (ZCBTA) and is also director of the Zimbabwe Amalgamated Housing Association (Zaha).