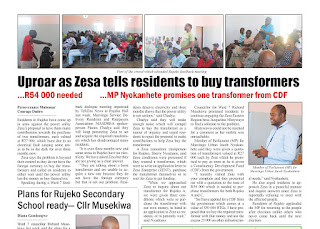 Residents in Rujeko have come up in arms against the power utility Zesa’s proposal to have them make contributions towards the purchase of two transformers, each valued at R27 000, which burst due to an electrical fault causing some areas to be in the dark for over three months now.
Zesa says the problem is beyond their control as they do not have the foreign currency to buy the transformers and called on residents to either wait until the power utility has the money or buy themselves.
Speaking during a Ward 7 feedback dialogue meeting organised by TellZim News at Rujeko Hall last week, Masvingo Service Delivery Residents and Ratepayers Association MASDRRA spokesperson Pianos Chadya said they will keep pressuring Zesa to act and acquire the required transformers which has disadvantaged many residents.
“It is over three months now and some areas in Rujeko have no electricity. We have asked Zesa but they are not giving us a clear answer.
“They are talking about a burst transformer and are unable to acquire a new one because they do not have the foreign currency but that is not our problem. Residents deserve electricity and three months shows that the power utility is not serious,” said Chadya.
Chadya said they will make enough noise which will compel Zesa to buy the transformer as a matter of urgency and urged residents to reject the proposal to make contributions to help Zesa buy the transformer.
A Zesa committee chairperson for Rujeko, Sherry Nyashanu, said three conditions were presented if they wanted a transformer, which were to write an application letter to Zesa Enterprise (ZENT), purchase the transformer themselves or to wait for Zesa to get funding.
“When we approached Zesa to inquire about our transformer for Rujeko A, we were given three conditions which were to purchase the transformer with our own money, to hand in an application to Zent as residents, or to patiently wait,” said Nyashanu.
Councillor for Ward 7 Richard Musekiwa promised residents to continue engaging the Zesa Eastern Region boss Jacqueline Hlatywayo to find a solution to the problem.
Hlatywawo could not be reached for a comment as her mobile was unreachable.
Member of Parliament (MP) for Masvingo Urban Jacob Nyokanhete said they were given a quotation of transformers valued at R27 000 each by Zent which he promised to pay as soon as he is given a Constituency Development Fund (CDF) from the government.
“I recently visited Zent with your complain and they presented me with a quotation to the tune of R54 000 which is needed to purchase transformers for both Rujeko A and C.
“So I have applied for a CDF from the government which comes at a value of $50 000 RTGs. I have proposed that we buy the required transformer with that money and use the excess 23 000 on other infrastructural needs,” said Nyokanhete.
He also urged residents to approach Zesa in a peaceful manner and inquire answers since Zesa is reportedly refusing to meet with the affected people.
Residents of Rujeko applauded the MP for returning to the people after elections unlike others who never come back until the next election.
Share !