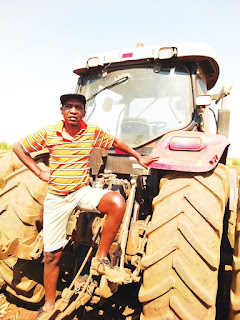 CHIREDZI - Masvingo Provincial War Veterans Secretary for Agriculture, Sapper Major Faster Gono has come out guns blazing attacking senior Zanu PF officials of spearheading corruption and getting away with it.
Gono pleaded with President Mnangagwa to remove the kid gloves he treats corrupt officials with and set an example as no one is above the law.
“There is a lot of corruption going on in the country and what is worrying is the perpetrators are getting away with it.
“President Mnangagwa has to crack whip on this officials because treating them with kid gloves will not work,” said Gono.
Gono complained bitterly over the corrupt land dealings in Chiredzi where senior Zanu PF officials’ families, friends and girlfriends are prioritised in the distribution of land.
“They enjoy benefits with their families at the expense of the masses. Senior Zanu PF officials grab land for their children from the first born up to the last born. Their friends and girlfriends are also included in the matrix.
“It is time to put a stop at this whole corruption because these people are sabotaging President Mnangagwa.
“The President’s name is being soiled and we have the evidence of the corruption here in Chiredzi and we are ready to expose them,” said Gono.
Zanu PF chefs are reported to be angling themselves to take over 25 000 hactares of land at Tugwi-Mukosi once the master plan has been approved.
President Mnangagwa is on record saying there is no room for corruption in the new dispensation but so far it has all been just talk without action.