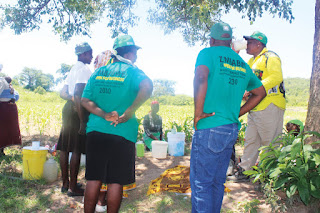 When the uninitiated look at marula fruits (mapfura), it is hard to imagine their value beyond the sweetness of their strongly scented sap which is ordinarily sucked before the soft skin and the jellish seed is chucked away.
But for hundreds of families in Zaka, the fruits are more than just that as they are providing a substantial income stream through the marula brew known as mukumbi.
Like every other indigenous fruits, marula are seasonal; lasting for not more than three months per year on average when they blanket rocky areas and fields from March to May.
Along the Chivamba - Bangala Road in Zaka West, people ply their mukumbi business every year thereby increasing the popularity of the age-old traditional brew.
In areas under chiefs Nyakunhuwa, Bota and Nhema, custom has it that the first brew from the first fruits of the season has to be dedicated to traditional leaders and must be consumed communally before villagers can then sell subsequent brews.
This is a traditional rite known as ‘matasutsa’; a form of celebration of the first fruits and a thanksgiving to ancestral owners of the land.
The marula tree is a revered tree which has sent many children to school and has helped preserve an important custom in communities where modernity continues to wipe off traditional practices.
For Estere Mudzingwa (63) of Guyo village under Chief Bota, mukumbi is a reliable source of income every year especially if the rains have been good in the preceding months.
“We sell our brew on Wednesdays and Saturdays for 50 cents a cup. We do it in groups and one can have 40 to 60 litres of mukumbi to give us $20 or better on a good day,” said Mudzingwa.
Acting Chief Bota and Charuka village head, Kamurai Zezai said marula, just like other natural resources, were a gift from ancestors hence the rule that the product of the first fruits must be shared through the traditional leadership.
“When the fruits ripen, those with marula trees in their fields have to bring at least 10 litres to the village head. He, in turn, would call his aides and they then drink together with the family of the brewer.
“This way, we would be thanking our ancestors because we believe that they give us the fruits. Long ago, people were not allowed to sell the brew for it was regarded as a free gift from the ancestors but things have evolved partly due to economic factors that have come into play,” said Zezai.
Incumbent Chief Nhema, Rangarirai Bwawanda said mukumbi was a product of a sacred fruit hence the need to observe customary practices when commercialising it.
“The system of presenting the first brew to the traditional leadership is done as a way of thanking the ancestors. It also brings the village head or the chief closer to his subjects.
It also preserves the leader’s authority over his subjects and allows the leadership to be able to monitor the conservation of natural resources like trees,” said Bwawanda.
In Matembudze area and most parts of Chief Nyakunhuwa’s area, cutting down a marula tree is a serious offence which is punishable by a fine in the form of a goat and traditional beer for the chief and his court.
Matigimu village head, Joseph Mutubuki said when there is genuine need to cut down a marula tree, one has to consult the village head who then gives permission.
“When one has a convincing reason to cut the tree down, we assess the reason and if there is a real need, we then give the go ahead. If the tree is barren, for example, or it affects the growth of crops or if it poses a threat to humans, we allow it to be cut down,” said Mutubuki.
He said besides selling the brew, villagers were also using it as payment for work done especially when people have been given piece jobs like weeding and clearing new land for crops.
For Hamon Chigevenga, a mukumbi connoisseur from Kuvenga village, Headman Chidembo, under Chief Nhema, mukumbi brings families together.
“I brew mukumbi for my family. I call my sons and sons’ in-law who stay and work in other areas to come and have quality time drinking mukumbi. It unites me and my relatives and I do it every year. I don’t wait for Christmas holidays to come together with my extended family and be happy. I am lucky to have plenty of trees in my fields so I brew at least two 20 litre buckets every weekend,” said Chigevenga.
However, the brew’s taste and strength varies from one brewer to another, and from one area to another, with brewers in other areas bordering Zaka district adding millet malt to catalyse fermentation.