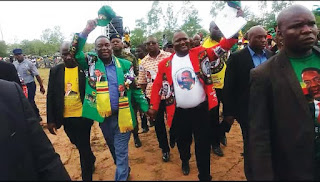 Hundreds of people made it to President Emmerson Mnangagwa’s ‘Thank You’ rally in at Rutenga last Saturday aboard an old goods train in which the party’s Chiredzi leadership had packed them to boost attendance, TellZim News can report.
Some of the party supporters said they had expected to be ferried in busses but that was not to be as they were told at the 11th hour that they would travel by train.
“Nothing could be more dehumanizing than traveling over 100km in an open goods train. Some people did not care and were actually excited. But a few of us didn’t take it lightly,” said the female party supporter.
Another one said what was more outrageous was that senior party members and their close associates drove all the way to Rutenga in their big vehicles.
“We were packed like sardines. It was not comfortable but there was nothing we could do about it. You want to go wherever other go as that is the system in the party. If you stay behind, you risk being labeled and you then lose out on many things,” said the ordinary card-carrying party member.
Zanu PF has consistently ignored calls not to abuse public resources for partisan gains, and up until now, many of the party’s vehicles do not pay tollgate fees.