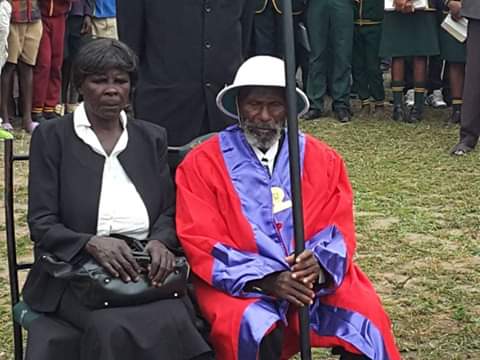 Jawanda (right) and his wife

Cephas Shava
MWENEZI - Elliot Jawanda, who was appointed the new substantive Chief Mawarire at the end of last year, had his installation ceremony finally held on March 15 after the occasion was postponed more than twice last year.
The installation ceremony was held at Mawarire Primary School, Ward 4, under Chief Mawarire.
In attendance was the Minister of State for Masvingo Provincial Affairs, Ezra Chadzamira, National Council of Chiefs president Chief Fortune Charumbira, legislators, trational leaders and government employees.
Jawanda took over the chieftainship from Amon Vengo who has been acting chief since the death of his father who was then substantive chief until his death.
Speaking to TellZim News during the appointment of Jawanda as acting chief, the District Administrator (DA) Rosemary Chingwe said there were four families with a stake in the Mawarire chieftainship.
She said unlike in many cases elsewhere, there was consensus on the new chief and the families had avoided leadership wrangles.