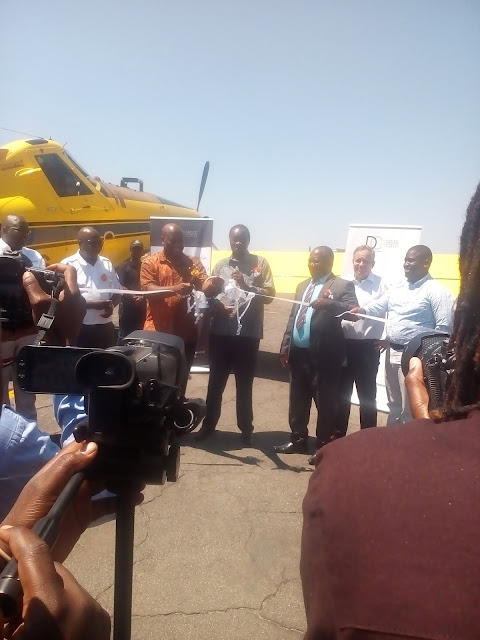 Beatific Gumbwanda
CHIREDZI - The Minister of Mines and Minerals Development, Winston Chitando has commissioned the Mwenezi Aeromagnetic Survey for Diamonds to ascertain the veracity of the speculated diamond wealth in Chiredzi and Mwenezi.
The commissioning was done at Buffalo Range International Airport.
The search is being done by Aerosurv in partnership with a South African cmpany, Xcalibur Airborne Geophysics.
The Airborne Mineral Exploration Project is aimed at unpacking the country’s diamond wealth over a survey distance of 8 800km.
Aerosurv seeks to further utilise capacity, expertise and equipment in the Limpopo Mobile Zone (Ngundu) area to conduct a high resolution, low level airborne survey of the surrounding areas including River Ranch, Murowa and Mwenezi.
The primary focus will be on conglomerate, alluvial and Kimberlitic diamond deposits.
Chitando said his ministry wanted to grow the size of the national diamond industry from the current $2.8 billion to a $12 billion industry by year 2030.
“It’s an important milestone which government is working towards. The attainment of Vision 2030 will require the diamond industry to contribute,” said Chitando.
He said the diamond industry produced 2.8 million carats in 2018 against a target of 10 million carats.
“Last year the diamond industry produced 2.8 million carats of diamond and the whole idea for this is to go to at least 10 million carats by 2023. The 10 million carats projection is based on geologically proven sites and on the exploration which is now taking place, who knows what can happen?” said Chitando.
The Minister of State for Masvingo Provincial Affairs, Ezra Chadzamira welcomed the prospective investment opportunity which he said will transform Rutenga and Sango border post.
“The exploration of diamonds will bring new diversified activities in Mwenezi and Chiredzi districts resulting in economic transformation of the Lowveld towards massive rural development. This will include the development of Rutenga as a dry port and the modernisation of Sango border post,” said Chadzamira.