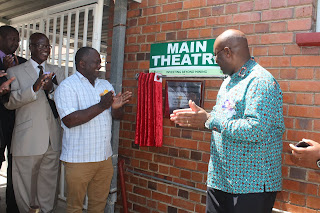 ...donates to Masvingo Cyclone Idai victims
Clayton Shereni
Platinum miner Mimosa Mining Company on Monday officially handed over a refurbished main theatre and laundry facility at Masvingo Provincial Hospital to further its social responsibility record.
The mining company also drilled a borehole at the hospital to ensure uninterrupted water supplies even when council supplies are unavailable.
The handover was presided over by Mines and Mining Development minister Winston Chitando who is a former executive at the Zvishavane-based mining company.
"Mimosa holds only about six percent of the platinum reserves in the country but they have done exceptionally well in giving back to the community. If all the inactive mining companies were to partner Mimosa in development, our nation would change for better," said Chitando.
Mimosa managing director, Fungai Makoni said the company cared for the welfare of all citizens especially on issues to do with their health.
"We decided to partner this hospital after learning that they had been elevated to a provincial hospital status. We felt compelled to play our part in ensuring that the hospital is better equipped to deal with an increase in the volume of patients that comes with the new status," said Makoni.
Masvingo Provincial Medical Superintendent, Julius Chirengwa thanked Chitando and Mimosa for the work they did to improve conditions at the hospital.
"Minister Chitando and Mimosa Mining Company made an undertaking to assist us in renovating our two departments. We are aware that it is one of their social responsibility initiatives to assist institutions in need but they could have chosen a different hospital,” said Chirengwa.
Other health institutions which have benefited from Mimosa corporate social responsibility include Chitungwiza Central Hospital and Zvishavane Rural District Hospital.
The company also handed over donations to the Minister of State for Masvingo Provincial Affairs, Ezra Chadzamira for distribution to local victims of Cyclone Idai.
Donations included tons of maize meal, sanitary wear, blankets, tea cups and cooking oil.
"I would like to thank Mimosa and all the workers who donated wholeheartedly. Thank you for remembering us during these trying times. Our Civil Protection Unit (CPU) will deliver these goods to the victims and we will work tirelessly to prevent corruption in the distribution of these donated items," said Chadzamira.