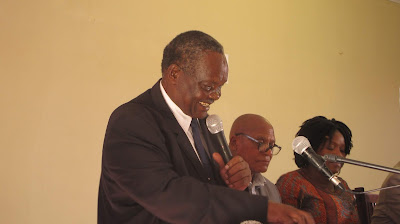 Rtd Justice Sello Nare and other commissioners during the Masvingo outreach

…commission to set-up peace committees
Anymore Magawa
The National Peace and Reconciliation Commission (NPRC) recently held a meeting in Masvingo to appraise people on the mechanisms and approaches being used to handle issues of national healing and reconciliation..
The meeting was graced by the Masvingo Provincial Minister Ezra Chadzamira, Provincial Administrator (PA) Fungai Mbetsa as well as by NPRC commissioners including Netty Musanhu and its chairperson, Sello Nare.
In his address, Nare said the commission was formed to foster peace and heal victims of political violence in the country.
“The establishment of the commission was an attempt to address past incidences of political violence and bring healing to victims.
“I am here to launch NPRC in Masvingo and this marks the beginning of national unity and reconciliation. The NPRC was formed in 2013 and it does a conflict analysis in an attempt to address social cohesion and help citizens to understand the peace-building processes,” said Nare.
He said by June this year, the commission will have set up thematic peace committees from district to national level to quicken the resolution of past conflicts and healing process.
“We are launching the outreach programme here in Masvingo and we will do the same in other nine provinces.
“We will soon conduct hearings where we will meet the victims. By June this year, we should have come up with peace committees after which we will conduct hearings for the victims of violence,” Nare said.
In her remarks, Musanhu said the organisation planned to do a thorough conflict analysis that will help shape the way forward, adding that past conflicts covered the pre-independence era going forward.

“You may remember that before independence, we had some issues on people’s livestock which were taken and that was source of conflict. At independence, some celebrated the new dawn of political emancipation, but there was a lot of unfinished business.
“On Gukurahundi, there are still a lot of scars, as we all know what happened. Lastly, we considered the year 2000 to date where inflation, street protests due to price hikes and electoral violence happened,” said Musanhu said.
The core functions of the commission is to promote post conflict, justice, national healing and reconciliation as well as to facilitate truth telling, rehabilitation, conflict prevention and the promotion of national unity and cohesion.