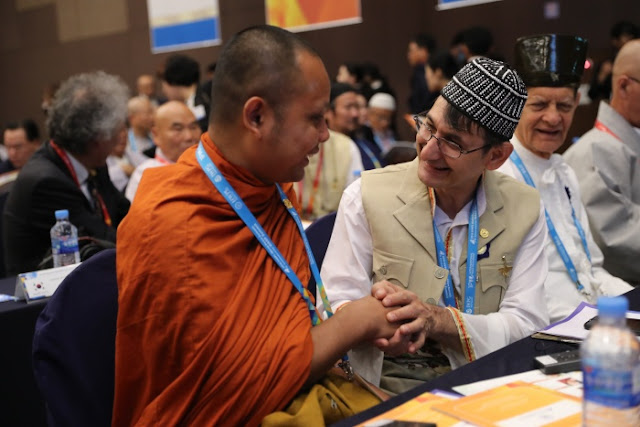 The Era of Religion Never Fades Away
Since the bombings of the World Trade Centre on September 11 close to two decades ago, the rise of extremism and the acts of violence in the name of religion have grown rapidly across the world. Today, we see that there have been a series of bombing and shootouts and places of worship are no longer seen as sacred, but rather as targets. These events have brought concerns over religion to the forefront and have inspired the international community to create platforms for dialogue in search of the role religion can play in realizing global peace and security.

As a new attempt, a platform for religious leaders to establish a network of peace with the aim of enhancing understanding of religions through scriptures has been carried out in 220 locations from 130 countries. The “World Alliance of Religions’ Peace (WARP) Office”, is a platform established in 2014 by an international NGO named Heavenly Culture, World Peace, Restoration of Light (HWPL) which works to find the nature of religious values for peacebuilding through scriptures. HWPL is registered under the UN ECOSOC, it has its headquarters in Seoul, South Korea and seeks the role of religion in conflict resolution and prevention through the network of global religious leaders.
In the month of April, an international conference named “The Role of Cultural Diplomacy in Approaching the Protracted Conflicts” was held in Romania alongside HWPL. At the event, Chairman Lee of HWPL shared that: “Through the WARP offices, religious leaders bring their religious scriptures to examine trustworthy, physical evidence of religion. These comparative studies have been put in place to ensure that there are no more wars that will be triggered by religion.” The Chairman also added that the culture of earth cannot disguise the one of heaven with a man’s yardstick of judgment and that religion is to learn the world of spirit and teachings of God. “This is the heavenly culture that guides us to the world of peace,” Chairman Lee shared.
The religious network of peace has been further developed to appeal to the young generation and to build the confidence of religion through communication and understanding. “Various religious teaching program for youth such as religious youth peace camp gives lesson for participants to learn about the general history of world religions, find the root cause of and plausible resolutions to religious conflicts and disputes, examine the religious community’s roles for peace, and experience cultural exchanges,” said Dr. Ahmed Jasem Hmood Al-Maliky, Sheikh of Office of the Religious Reference Sheikh Mohammad Al Yaqoobi in Iraq.