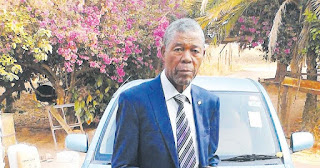 Brighton Chiseva
ZAKA – The cash-strapped Zaka Rural District Council recently splurged thousands of dollars on expensive smartphones for the 34 councilors, a move which has drawn sharp criticism from residents who accuse the local authority of misplaced priorities.
Residents accused the local authority of failing to prioritise more important issues like refuse collection and provision of safe and reliable water for domestic use.
“Jerera has no dumpsite and council cannot even collect refuse regularly. We therefore feel that the councillors and council management are serving themselves,” said a Jerera resident.
When contacted for comment, council chairperson Cornelius Mapuranga justified the purchase but refused to divulge the type of cellphones bought for councillors.
Some sources, however, said each councillor got a 10-inch Samsung Galaxy Tab 3 which trades in some South African retail outlets for R8 000, an equivalent of US$572. The phone comes with a standard 34 gigabytes of internal memory.
Mapuranga said councillors were now looking forward to getting motorbikes when the authority’s financial position ‘improves’.
“We wanted to ease the burden of communication so we bought the cellphones. Our wards are big and we cannot be travelling all the time. We need to use the cellphones to communicate. The type of phones we bought doesn’t matter, what matters is that we now have easy communication with our people. We are now looking forward to getting motorbikes in the near future,” said Mapuranga.
Chief Executive Officer (CEO) David Majaura refused to comment, saying he was out of office and referred all comments to administrator Nancy Chatikobo who was also not available.
A 2017 full council resolution rejected demands by some councillors for motorbikes and only approved cellphones which, however, could not be bought until now.
Zaka District Development Coordinator (DCC) Ndeya Nyede defended the move and said the money will be recovered during the councillors’ term of office in the same manner that a stands-for-councillors scheme works.
“The money will be recovered during their term of office. For effective communication, it’s important that they got those phones. The government is preaching E-governance so it’s a positive start,” said Nyede.