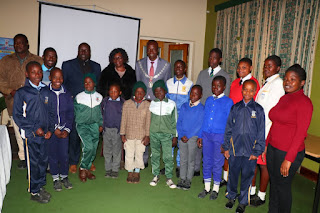 Mayor Josiah Makombe and other officials with some of the beneficiaries

GWERU – The Mayor’s Christmas Cheer Fund recently reached out to disadvantaged school children in the city, with a total of 82 pupils having their school fees paid.
Mayor Josiah Makombe handed over the school fees payment confirmation letters to heads of such schools as Solace College, Bumburwi Primary, Takunda Primary, Chikumbiro Primary, CJR Primary, Chaplin High, Senga Secondary, Budiriro Primary, Thornhill High, Mambo High, Mkoba 3 High among others.
Makombe pledged to support the school fees needs of the children for as long as he remained the mayor of Gweru.
“We have dedicated the fund towards the education of these disadvantaged children. We worked with schools heads who helped us identify them. A total of 32 primary and secondary schools were covered and I would like to thank the Gweru community and all stakeholders who contributed towards the fund,” said Makombe
Makombe thanked Gundu, Dube and Pamacheche Legal Associates for partnering the fund and supporting a girl who is studying law at Midlands State University (MSU) and a boy who is at Mkoba Teachers’ College.
“Our partners Gundu, Dube and Pamacheche Legal Associates are sponsoring a girl’s university education. The girl had dropped out of school but she is now at MSU thanks to the support of those partners. We also have a boy at Mkoba teachers College,” Makombe said.
The event was also attended by Gweru District Schools Inspector (DSI) Ella Dakwa who pledged that government will support the children by providing their stationery requirements.
“We will also make our contribution to the welfare of these 82 children by providing the books they require. We want them to enjoy a hassle-free educational experience,” said Dakwa.
Budiriro Primary head, Herbert Matimba said the fund had come at a critical time when many children at his school risked dropping out.
“With the help of SDC committees and councillors, children who really deserve to benefit were selected and we are pleased with the process,” said Matimba.