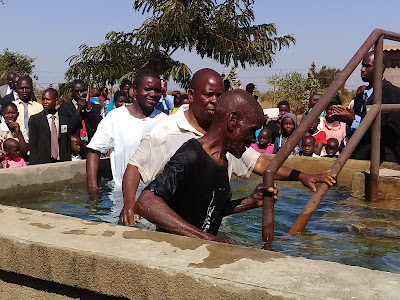 CHIPINGE – A 79-year-old proved that love never fails when he dedicated himself to God through baptism in water at a three-day Jehovah's Witness (JW) regional convention held at Checheche Expandable Assembly Hall in Chipinge on July 19-21.
The programme was held under the theme ‘Love never fails’, and was attended by 2 055 people.
Kanyezi Nyamayavo of Mabee became the oldest among all the 43 new members who got baptised on Saturday 20 July with 74 year-old Janet Ngwenya of Chiriga being the second oldest.
The youngest to be baptised was 11-year-old Chido Khumbula of Checheche, with 15-year-old Ganizani Simango being the second youngest.
Delivering a sermon, Givemore Sikand encouraged the new devotees strive for spiritual growth just as an egg develops from a small cell to a big oval which then hatches into a chick.
Checheche Convention, spokesperson, Chinoda Chibindi said he was overwhelmed by the number of people who turned up
"The number of attendants, at 2 055, proves that people are willing to turn to Jehovah and work for the deliverance of their soul,” said Chibindi.
The the first day of the programme was focused on demonstrating how love never fails and on learning how to strengthen love in the face of such challenges as a troubled upbringing, chronic illness and poverty.
The following day, the course focused on considering Bible principles that are helping husbands, wives, and children to show unfailing love for one another while Sunday programme had a public Bible discourse.
The discourse, under the theme ‘True Love in a Hate-Filled World—Where?’, aimed to show that love is helping millions of people worldwide to overcome prejudice and hatred.
A two-part feature film named ‘The Story of Josiah: Love Jehovah; Hate What Is Bad’ portraying the Biblical Josiah who grows up surrounded by bad influences but rises to become a loving character was also released on the same day Vimbai Gochera of the JW branch office.
JWs are members of a worldwide Christian religion who actively share with others information about God, whose name is Jehovah, and about his Son, Jesus Christ. They view first-century Christianity as their model.
They believe that in addition to drawing one closer to God, living by Biblical principles gives purpose to life, promoting strong family ties as well as productivity and honest among people.