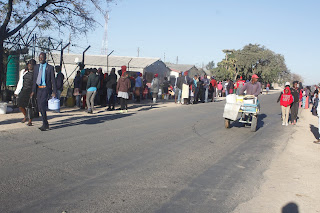 Struggle for water in Rujecko, Masvingo
Panashe Nchenamilo
Water has become one of Masvingo's most prized commodities with wealthy suburbs like Rhodene going for three days without any drop while low-income suburbs like Rujeko being the worst off,
Long lines of buckets and water containers can often be seen at community boreholes as boreholes have become the only source of water for all communities.
There have been stories of physical fights breaking out in the tense struggles for water and according to witnesses, police officers have had to step in to restore order on a number of occasions.
Even though the situation is tough, some people have started to make a living out of this crisis by manually pumping water into buckets and selling it.
"I sell water to people who are not able to wait in the queue. I can earn about $12 or more per day. I am able to take care of my family with that money but the only challenge is I have to get to the borehole at midnight to secure a place in the queue" said man makes a life out of the water shortages.
TellZim News interviewed a woman who shares a house with her extended family and she expressed her frustration.
"It's reality, but a painful one. We are used to living without running water. My husband, my two children and I use only two rooms at the back of the house. We have 15 plastic buckets and one 200-litre water container.
"My sister and her family has six buckets, 11 containers and two 200-litre drums. My children don't know what it's like to take a shower. The city council has not done enough to solve this crisis," she said.
Masvingo experiences regular water shortages because the public supplier lacks funds to treat water and has also been unable to maintain its water pumps at Bush Mead abstraction station.
The pumps often break down and the aging pipe network experiences intermittent bursts, leading to treated water getting lost.