Five die on spot as bus fails to negotiate curve 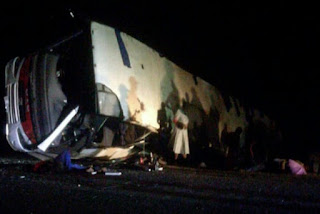 TellZim Reporter
Five people died and 44 others were injured in an accident involving a cross-border bus at the 129km peg along the Masvingo - Beitbridge road yesterday.
National police spokesperson Ass Com Paul Nyathi confirmed the accident saying it was suspected over-speeding had contributed to the tragedy.
“We appeal to drivers to exercise due caution on the roads and observe the stipulated speed limits. There is more that drivers can do to avoid such tragic loss of human life,” said Nyathi.
He said the deceased were sent to Neshuro District Hospital mortuary while the injured were sent to Neshuro District Hospital and Masvingo Provincial Hospital depending on the severity of their wounds.
The accident occurred at 18:45hrs when the driver of the South Africa-registered Africa Link coach allegedly failed to negotiate a curve, resulting in the bus overturning once and lying on its roof.