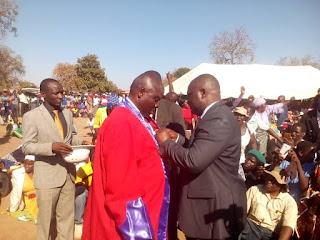 ZAKA – The newly revived Neromwe chieftainship which has been fought by Chief Tshovani has found another foe in the name of Chief Bota who is accusing Neromwe of annexing his territory.
Chief Bota, born Charuka Zezai, is accusing Neromwe, born Clemence Madzingo, of invading Dzoro and Dekeza areas which are under Bota.
Bota has since written a petition to 15 departments including the President’s Office and the Minister of Local Government, Public Works and National Housing complaining about the issue.
“This letter serves to inform you that there is a boundary conflict between Chief Bota and Chief Neromwe of Chiredzi district. The complainant is Chief Bota who is accusing Neromwe of invading Dekeza and Dzoro areas which belongs to Chief Bota under Zaka district,” reads part of the letter
The letter also indicated that Neromwe tried to invade these areas in 2016 but was stopped after Bota wrote a petition to the then Provincial Administrator (PA) Felix Chikovo.
“In 2016 Chief Neromwe attempt (sic) to invade Dzoro and Dekeza but we have managed to stop these shenanigans through a circular written to Masvingo Provincial Administrator which (sic) was Mr Felix Chikovo, the late resident Minister Shuvai Mahofa and Chief’s council president Fortune Charumbira and the dispute was settled properly.
“This month Neromwe surprises me (sic) attempt again to invade my boundary using unscrupulous means which I suspect is a corruption and divide and rule tactic used by District Development Coordinators of Chiredzi and Zaka districts,” further reads the letter.
In the letter Bota also calls for mediated dialogue to resolve the matter before it gets out of hand.
When contacted for comment, Chief Bota said he was worried by Neromwe’s actions and he wanted higher authorities to take action.
“I cannot be told now that Dzoro and Dekeza area now fall under Neromwe because historically, they have never been under him. I am surprised by how they now want to take those areas from me when they have been under Bota chieftaincy since time immemorial,” said Bota.
On his part Neromwe said he could not comment much on the boundary issue because he was not responsible for its drawing.
“Bota was there when the commission established the boundary, so who am I to go against them. He should ask those who drew the boundary not me,” said Neromwe.
Zaka District Coodinator (DCC) Ndeya Nyede said there could not be a boundary dispute between Bota and Neromwe for the two are in two different districts and the district boundary will separate the two.
“Neromwe is in Chiredzi while Bota is in Zaka so the two cannot conflict over a district boundary which was established long ago. None of them can encroach into another district as they are claiming,” said Nyede.
Masvingo Provincial Development Coordinator (PDC) Fungai Mbetsa echoed the same sentiments saying Neromwe will only rule over an area that had previously been seized by white settlers and willl not go into communal areas.
“Neromwe’s area is in Chiredzi and covers only the area that was under white settlers and Bota rules over the communal areas in Zaka. Bota never ruled over people in the resettlement areas so there cannot be a boundary conflict between the two,” said Mbetsa.