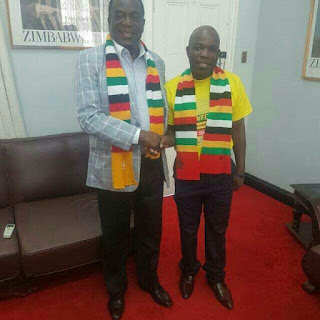 Diana Gondongwe
Knives are out against Zanu PF Masvingo youth league boss Brian Munyoro who was last week confronted by a group of local and Harare-based youths who accused him of corruption, sexual abuse and personalising party property.
Zanu PF national youth league political commissar Godfrey Tsenengamu led a group of Zanu PF youths from Harare for an outreach in Masvingo.
The outreach was met with little success after Munyoro reportedly snubbed the meetings in the wards and failed to mobilise party supporters to attend as a way of sabotaging Tsenengamu’s work.
Sources said during one of the meetings at Roger Howman Training Centre, some youths seized Munyoro’s car keys and cell phones while others beat him up.
TellZim News established that the some members of the Masvingo provincial youth league are unhappy with Munyoro’s leadership but no one had the guts to stand up to him until they formed an alliance with the visiting Harare youths to humiliate him.
When contacted for comment, Munyoro said the youths who demonstrated against him were just jealous and are fabricating stories to try and soil his name.
“It all happened in full glare of our leadership and they are all aware of what happened. I now wait to hear from them on the course of action to be taken against the culprits.
“They are just people who are jealous of my life and will do anything to soil my name. I have not done anything wrong but I have remained focused in supporting and building our party even during the time when we were vilified for being Lacoste members,” said Munyoro.
Youths who spoke to TellZim News accused Munyoro of being a sexual predator who abused women under his ranks.
“We want him to go and we will not rest until he is send packing. We want leadership which is exemplary not what we are seeing in Munyoro.
“He has bedded many women under his rank by abusing his powers and the car which the party gave him. Last week in Chiredzi he tried the same tricks on one of the ladies but he was turned down. He then tried to force himself on the lady but he failed.
“He uses the party vehicle as his bedroom and that must stop. The vehicle he drives belongs to the party yet he personalises it. We heard a lot of reports about him and we decided to act because the youth here are afraid of him,” said one youth from Harare.
The youth league accuses Munyoro of stealing over 3 000 litres of fuel which had been donated for party programmes.
“Masvingo got 4 000 litres of fuel to do party programmes and Munyoro converted 3 000 litres to personal use and declared only 1 000 litres,” claims one youth.
Other sources said Munyoro was dictatorial in his leadership approach, accusing him of stripping other league leaders of their powers.
“He does everything himself. He is now the chairperson, the treasurer, the spokesperson and the commissar of the whole province. He personalises power and all other elected members have been rendered irrelevant. He is also abusing his power to sleep with all the girls,” complained a source.
Another youth league member, however, defended Munyoro saying the fight was simply a manifestation of factionalism in the youth league.
“There are bigger divisions in the league and Munyoro is just a victim. They are jealousy of his success and the big car he is driving?” said the member.
Zanu PF national youth league boss Pupurai Togarepi could not be reached for comment as his mobile went unanswered.