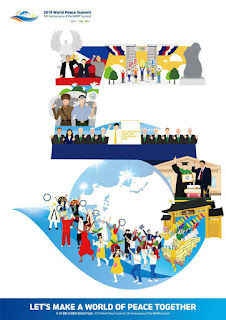 In September, the “2019 HWPL World Peace Summit” will be hosted in over 130 locations in 87 countries including South Africa, United Kingdom, Russia, and the    United States of America in cooperation between international peace NGO Heavenly Culture, World Peace Restoration of Light (HWPL) and international civil society organizations and governments.
With the theme of “Legislate Peace – Implementation of the DPCW for Sustainable Development”, the event is expected to expand the agreement by collecting further public support for the establishment of a legally binding international law for peace based on the Declaration of Peace and Cessation of War (DPCW).The DPCW, a comprehensive document which clarifies the role of members of the international society to prevent and resolve conflicts is in the process of being introduced to the UN as a draft resolution.
In Cape Town, the South African branch along with Cabinet Ministers, Speakers of Parliament and women organizations will announce the reply of peace letters and the initiatives of peace education and will show how the DPCW can be used for promoting the end of violence in Africa. The regional manager of South Africa stated that the event aims for the high-level government officials’ support of the regional peace initiatives and it has a goal to receive a reply from presidents regarding the peace letters in the Southern African countries.
In South Korea, the event is planned to be held over 2 days from the 18th to 19th September and includes sessions to discuss the practical measures for building sustainable peace across the world.