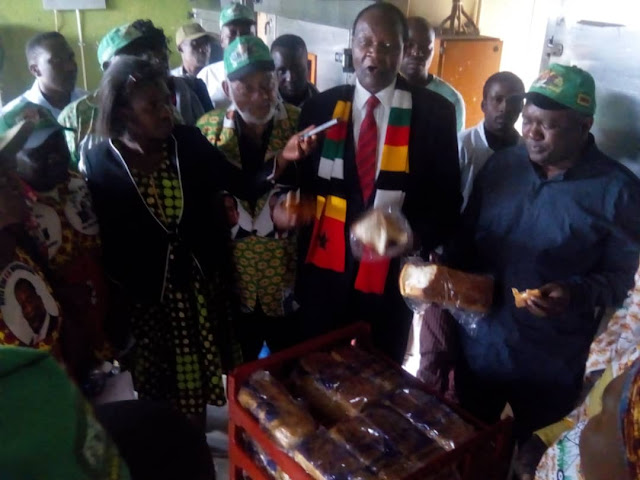 …orders civil servants who support opposition to leave jobs
Cephas Shava
MWENEZI-The Minister of State for Masvingo Provincial Affairs, Ezra Chadzamira last weekend gave a chilling warning to residents of Rutenga growth point Ward 18, Mwenezi East, that should they remain ‘defiantly’ in support of the MDC, food aid from government will be withdrawn from them.
Chadzamira made the remarks on August 24 when he addressed Zanu PF supporters who gathered at Rutenga, the heartland of the opposition party supporters in the district, for the victory celebrations hosted by Mwenezi East legislator Joosbi Omar.
Ward 18 is the only one won by the opposition party in the whole district during the 2018 harmonised elections. Mwenezi district has a total of 18 wards.
Chadzamira said food aid was a privilege bestowed by Zanu PF and could be withdrawn from ‘non-Zanu PF supporters’ at any given time.
He said the opposition supporters will for now be given a reprieve which will however not be maintained if they continued to exhibit ‘deviant’ behaviour.
“Everyone should get food aid because there is hunger all over. I heard that here in Rutenga social welfare is not being distributed but I have instructed the DA it must be distributed here as well. As time goes on, we will not continue feeding other people’s children….as we move forward, each one will be fed by his own father.
“Those who follow Chamisa will be fed by him, so it’s wise for those who are following him to start retreating while there is still some time because the government which gives food belongs to Zanu PF, a party which formed it,” said Chadzamira to a loud applause from the gathering.
Chadzamira also declared that all civil servants belonged to Zanu PF and anyone who dared to act to the contrary will face the consequences.
“Those civil servants who have been introduced here (DA Rosemary Chingwe, some nurses and police officers as well as heads of government departments) belong to Zanu PF because they are working for a Zanu PF government. Those who want to work for MDC while they are still in government will get their job when the MDC party rules.
“I don’t know when will be that be but maybe it’s the time when donkeys grow horns. All people working in government are Zanu PF and those who do not want should leave their jobs,” said Chadzamira.
This was Zanu PF’s first ever defeat here since the formation of the opposition party.
Before the 2018 elections, Zanu PF had never lost any ward to the opposition.