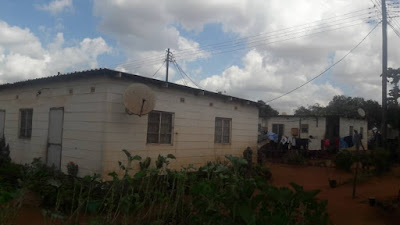 The GMB houses in Chiredzi
Beatific Gumbwanda
CHIREDZI- The local depot of the Grain Marketing Board has engaged its lawyers to evict from staff quarters about 21 former employees who contracts were terminated in August 2015.
The employees were fired summarily following a Supreme Court ruling which found that there was nothing at law that could stop employers from dismissing workers using a three-month notice.
The company has now engaged its lawyers G.H Muzondo and Partners to eject the former employees from staff houses.
In 1974, GMB entered into a 40-year lease agreement with Chiredzi Town Council (CTC) in respect of 13 residential stands otherwise known as Grain Marketing Board Staff Quarters, Nandi Siding Depot, Tshovani Township. GMB constructed houses on the stands to accommodate employers and the lease has since expired.

In its particulars of claim, GMB states that the tenants no longer have any right to remain in the houses since they long ceased to be in the employee of the State-owned grain buyer.

"The first defendant (former employees), his tenants, assignees and all those claiming right of occupation through him be and is hereby ordered to vacate the property known as house number 316 B (Adam Mupeti) Justin Road, Grain Marketing Board staff-quarters, Mandi Siding Depot Chiredzi and surrender vacant possession of the plaintiff.
"Failure of the above, the messenger of court Chiredzi be and is hereby authorised, empowered and directed to evict and remove the first defendant, his tenants, assignees and all those claiming occupation through him together with all his belongings from house number 316 B Justin Road, Grain Marketing Board Staff-quarters, Nandi siding depot, Chiredzi," reads part of the document.

Through their lawyers, the former employees, however, argue that GMB has no power whatsoever to evict them from the houses as it no longer the agreement with Chiredzi Town Council expired in March.

"There is a matter before Masvingo High Court under case number HC352/18 which is still pending. The matter before the high Court involves the same parties in this matter and the issues are the same.
"The plaintiff has no locus standi judicio. She is not the owner neither does she have a lease agreement with the second defendant (Council) which expired in March 2014 and the lease was not renewed.
"The first defendant avers that the claim has now prescribed. Termination of employment was done in August 2015. The summons commencing actions were issued on 13 June 2019. The claim should have been brought within three years upon termination of employment in terms of the Prescription Act because the cause of action arose in August 2015 therefore the claim is now prescribed.
"The plaintiff was the employer of the first defendant. She terminated the contract of employment between her and first defendant in August 2015. The plaintiff is not the owner of the property neither does she have a lease agreement with the second defendant. More so, there is another matter pending at Masvingo High Court between the same parties on the same property,” reads the plea.

The former employees claim they have been paying rentals directly to Chiredzi Town Council not through GMB.