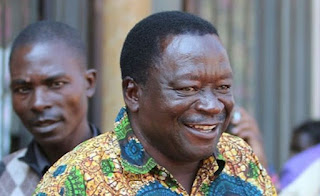 …throws Zivhu under the bus
Upenyu Chaota
Zanu PF national political commissar Victor Matemadanda last Saturday launched a scathing attack believed to have been directed at politburo member Josaya Hungwe whom he literally accused of trying to foment factionalism in Masvingo province.
Addressing Zanu PF supporters at a campaign rally to drum up support for Clemence Chiduwa ahead of the Zaka East parliamentary by-elections slated for September 21, Matemadanda took a thinly-veiled dig at Hungwe, saying the party will not tolerate any acts of indiscipline.
Matemadanda made startling claims that any senior officials who try to defend such people will be sowing seeds of division.
Hungwe recently hogged the limelight after it emerged that he tried to defend the Chivi South Member of Parliament (MP) Killer Zivhu whose fate rests with the national disciplinary committee.
The Zanu PF Masvingo Provincial Disciplinary Committee recently recommended for his expulsion over gross acts of indiscipline.
“There are those who think that indiscipline will make them fearsome or visible. Discipline is very important and if you engage in any acts of indiscipline and think that a senior member will come to your rescue, you will be putting that senior official in trouble.
“We are guided by the constitution and no senior official will be able to breach the constitution to save an errant member. We are all allowed to say what we want but we do that to the later and spirit of the party.
“If you see something that you are not happy with, speak out procedurally. If you just speak recklessly while the people from MDC will be cheering you on, we will kick you out,” said Matemadanda in apparent reference to Hungwe and Zivhu.
When Hungwe was later given a chance to give a vote of thanks, he appeared glum and dispirited; delivering just a short prayer for Chiduwa in an uncharacteristic departure from the long-winding speeches that he often delivers at such gatherings.
Zivhu is hanging by a thread after he posted of his Twitter account that if President Mnangagwa and MDC leader Nelson Chamisa do not want to find each other and dialogue, their wives must intervene to save Zimbabwe from economic collapse.
Matemadanda said factionalism no longer has a place in Mnangagwa’s Zanu PF and warned leadership against dividing the grassroots.
“We don’t want leaders who say they own people, all people belong to Zanu PF. No one belongs to Matemadanda or any other individual. We will not tolerate seeds of factionalism.
“If we see that you are not tearing the line we will kick you out. We want to give our party time to push for development not factionalism.
“No one can fit Zanu PF into their pocket but everyone can fit into Zanu PF’s pocket.  There are those in leadership positions who divide people by saying they own people. These are the seeds of rebellion and we will not hesitate to pluck them out,” said Matemadanda.
Matemadanda said no one should mess with Masvingo, claiming it was the only province which remained loyal to the party when all other provinces had been taken over by G40.
“Masvingo is the only province which stood with Zanu PF during difficult times and we do not want anyone to come and foment factionalism here. Masvingo is true to the party. If you ask (Saviour) Kasukuwere he will tell you that Masvingo is very difficult but that is the beauty of the province,” said Matemadanda.
Zanu PF Masvingo provincial chairperson Ezra Chadzamira said they agreed to bury the hatchet and forgive some of the known G40 assailants but they are not reforming.
“We know we have some G40 elements amongst us but we have said let us forgive each other. Now they are back to their devious ways and we will weed them off. We will remove them one by one until we remain with genuine party cadres.
“Masvingo is a one party state and no worm can come and destroy that. Kune vanoda kugara muhomwe dzeleadership wachiitiwa zvikwama zvinobudisiwa paanodira haiwa Masvingo haina factionalism. Kana ukarasika uri woga, ukaita mhosva dzako uri one usafunga kuti pane mukuru uchamira newe. We want discipline in Zanu PF kwete kunamata munhu.
“Worship Zanu PF and worship President Mnangangwa because he is the leader of the masses. Tinoda vanhu vanomira nemutemo weparty especially the leadership,” said Chadzamira.
Chadzamira said nothing is going to stop Zanu PF from retaining the Zaka East parliamentary seat saying they have already pulled all stops ahead of the election.
Zanu PF national chairperson Oppah Muchinguri is expected to address another rally before Vice President Kembo Mohadi closes the campaign with a rally expected on September 18.