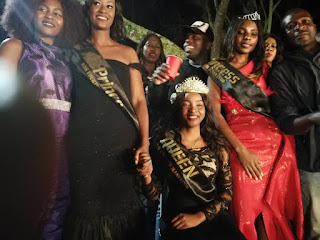 Grace Karimupfumbi and her princesses
Diana Gondongwe
Rising model Grace Karimupfumbi was on Saturday, September 07, crowned Miss Tourism Masvingo province during the prestigious modelling pageant held at Masvingo Golf Club.
Karimupfumbi’s star was shining bright as she out-modelled the other contestants to be crowned Misss Tourism Masvingo.
Rutendo Taruvinga was crowned first princess while Rutschen Hebert was second princess, and all the three winners walked away with cash prizes and received various hampers too.
The event was graced by Miss Tourism Zimbabwe president Sarah Mpofu-Sibanda who was impressed by the models and the manner the event was organised.
The winners will represent Masvingo at the national finals to be held in November at a venue to be advised.
The pageant ran under the theme ‘Promoting the Girl Child.’
One of the organisers, Yvonne Chirowamhangu said the girls did a good job and braved the cold weather and gave their best.
“The girls braved the weather and they all did a good job. Those who did not win must not lose heart but must be persistent in the hope that someday they will become victorious,” said Chirowamhangu.