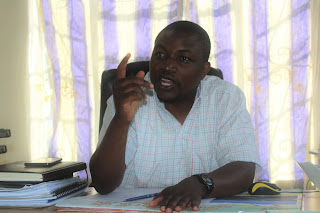 MASVINGO – The heavily-polluted water in Mucheke is no longer suitable for whatever use, and it would require several years of consistent clean-up exercises to restore the river to its original pristine state, the Mutirikwi Sub-Catchment Council has said.
Speaking to TellZim News in an interview, Mutirikwi Sub-Catchment Council manager Taruvinga Chivasa said it was important that all stakeholders worked together to protect rivers.
“Mucheke joins Shakashe River which is one of the most important tributaries feeding into Lake Mutirikwi; the sole source of drinking water for Masvingo city. It is unfortunate, however, that despite Mucheke River being clean upstream, it becomes choked with all forms of pollutants as it passes through the city,” said Chivasa.
He said the sub-catchment council would find it hard to issue out licences to anybody who requests permission to extract water from the part of that part of the river going downstream.
“It will be difficult, if not impossible to allow anybody to extract water from the river in its current soiled state. We need a plan with all stakeholders to stop the pollution and restore sanity in our river,” said Chivasa.
He said the invasive water hyacinth which blankets many pools in the river was thriving on human faecal matter which is rich is nitrates and phosphates.
“The weed is quite problematic in that you cannot simply get rid of it without a good plan. You may want to remove it mechanically but you would only be treating the symptoms, not the actual illness. The weed has thousands of seeds on the river bed and the weed would sprout once again as soon as it’s fed the nutrients it wants. So pollution has to completely cease first before we can talk about removing the weed,” said Chivasa.
He said during the rainy season, the hyacinth is washed down stream until it reaches the lake where it cannot survive due to conditions that are not favourable.
Besides sewage from burst pipes, the river is also polluted by litter thrown recklessly by pedestrians and motorists alike, while toxic oils and waste water from the industrial area also contribute substantially to the pollution.