Lawyers must work for people not for money, says Chief Justice 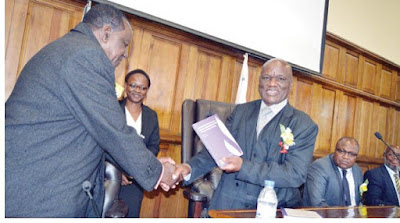 Malaba (right) greest GZU vice chancellor Rungano Zvobgo
Heather Buzuzi
MASVINGO - Chief Justice Luke Malaba last week called upon legal practitioners to be driven not by the love for money by the need to advance the cause of justice.
Addressing law students and other people who gathered at Great Zimbabwe University (GZU)’s Herbert Chitepo Law School for a memorial lecturer of the late national liberation war hero, Malaba said it was incumbent upon everybody in the legal sector to improve citizens’ access to justice.
"We must find a way of ensuring equality among Africans; citizens should be protected and their rights must be respected. Lawyers must be there to represent people and not to simply work for money. The law should create the person and no person should create the law, only then can we be free,” said Malaba.
The Law Society of Zimbabwe (LSZ) recently deregistered several lawyers for committing various professional indiscretions including corruption and failure to represent clients.

Malaba praised the late Chitepo as an exemplary lawyer who fought for the rights of the downtrodden and oppressed majority people of the country at the most difficult of times.

Chitepo become the first black barrister in the then Southern Rhodesia back in the 1950s after graduating from Fort Hare University in 1949.

He represented many nationalists including Ndabaningi Sithole and Joshua Nkomo who were fighting the colonial government.

He was assassinated by a parcel bomb in Zambia in 1975 while serving as Zimbabwe African National Union (Zanu) chairman during the liberation struggle.