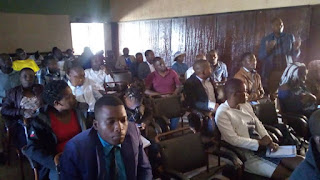 Courage Dutiro
Journalists in Masvingo have expressed their vehement opposition to a host of provisions of Zimbabwe Media Commission (ZMC) Bill which is one of the three bills meant to replace the Access to Information and Protection of Privacy Act (Aippa).
In their submissions during an outreach on the bill conducted by the Parliamentary Portfolio Committee on Information, Media and Broadcasting Services at the Civic Centre on Wedensday, October 16, media practitioners said the bill, if passed in its current form, would be detrimental to media freedom and freedom of speech.
Participants were particularly worried by Section 10 (4) of the bill which provides for the involvement of the police in investigating professional journalistic mistakes.
Zimbabwe Union of Journalists (Zuj) first national vice president Godfrey Mutimba said the section was meant to criminalise the profession.
“The bill should not criminalise the work of journalists. If a journalist can be prisoned for six months for a professional blunder, it simply means the profession is being criminalised. We are saying section 10 (3) and 10 (4) should be removed from the Bill so that journalists can operate without any fear,” said Mutimba.
Another journalist, Walter Mswazi said there was need for the bill to recognise the possibilities of self-regulation.
Misa Zimbabwe Masvingo chapter Chairperson Passmore Kuzipa said journalism was guided by ethics that amount to a code of conduct which renders the involvement of police both unnecessary and unacceptable.
“The code of conduct is enough a regulatory framework for the media as is the case with other professions that are already regulating themselves. The other professionals can deal with their own challenges on a peer review level; with room for them to investigate complaints, discipline colleagues and even deregister those who are incorrigible,” said Kuzipa.
Other participants said the bill had many frightening errors of omission including failure to spell out the term limits for commissioners.