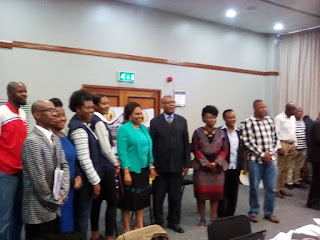 MUTARE - Information, Publicity and Broadcasting Services minister, Monica Mutsvangwa has said President Emmerson Mnangagwa wants Zimbabweans enjoy freedoms provided for by the 2013 constitution.
She said this at the official opening of national consultative workshop on Zimbabwe Media Commission (ZMC) Bill, Freedom of Information Bill and the Draft National Media and Film Industry Policy.
The workshop, which was held at Holiday Inn Mutare on September 26, saw stakeholders in the media and film industry convene in order to deliberate on the bills.
Mutsvangwa said stakeholders must feel safe, claiming President Mnangagwa was a truly devoted reformist.
"I want to give assurances from the very outset that President Emmerson Mnangagwa is a genuine and committed reformer. This came from the briefing he gave me as assigned me to my new ministerial task. He wants Zimbabweans to fully enjoy the freedoms they entrenched in the 2013 constitution of which he was one of the legal brains at the forefront, "said Mutsvangwa.
She said Mnangagwa was eager to nurture a culture of democratic conversation as evidenced by his opening of the debate on the Gukurahundi massacres of the 1980s.
"Our task is thus made much easier because my principal, the President aspires to nurture a culture of democratic discourse and governance that removes any hindrances to the full realisation of the Zimbabweans at work, at play and at worship.
"You can see this in practice. He has opened debate on every subject and dispensed with any political taboos all the way to the Gukurahundi affair. He is dispensing with all elements of fear in the national body politic.
"I look forward to this workshop's recommendations which should assist the ministry and parliament to appropriately position various clauses in the bills in a manner that unites the views of media stakeholders with those of citizens and government," said Mutsvangwa.